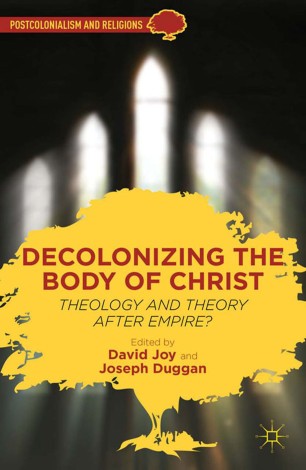 Decolonizing the Body of Christ

Theology and Theory after Empire?

Part of the Postcolonialism and Religions book series (PCR)

The first book in the new Postcolonialism and Religions series offers a preview of the series focus on multireligious, indigenous, and transnational scholarly voices. In this book, the once arch enemies of Religious studies and Postcolonial theory become critical companions in shared analysis of major postcolonial themes.

"Bold and innovative, this book shifts conversations on postcolonialism and religions from the Western academy to the Global South. This theoretically rich and contextually engaged volume charts the departure of a new discourse. I highly recommend it." - Kwok Pui-lan, author of Postcolonial Imagination and Feminist Theology

"This daring book and series set out to upset the dominance by Western scholars in postcolonial theorization by privileging a new style of scholarly engagement and foregrounding indigenous authors. The long-overdue inclusion of religion as central to constructive destabilization in neocolonial societies sets this series apart from all others." - John C. Hawley, editor of Historicizing Christian Encounters with the Other and India in Africa, Africa in India

"The essays collected here call for a decolonizing theology that is at once self-reflexive about Christianity's problematic imperialist subtexts and proffers a theological-religious route to emancipation within a postcolonial frame. The volume's overarching project of a determinedly postcolonial rewriting of colonial missions decodes not only the processes by which the ideology of empire inflected triumphalist stories and histories of Christianity but also the often skewed and geo-politically driven 'colonizing of the Christian legacy'. This fascinatingly eclectic collection addresses questions and concerns of a decidedly postcolonial nature in the domains of subaltern lives even as they address gender issues, multiculturalism, and new forms of imperial domination. In its postcolonial unpacking of traditional signifiers like martyrdom, scriptural texts, exegetical traditions, and the institutional frames of eschatology the volume wonderfully combines theology with critical theory. Decolonizing the Body of Christ is a major contribution to multiple disciplines in literary, historical, theological and mission studies." - Pramod K. Nayar, Dept. of English, The University of Hyderabad, India

"True to the goals of the series on Postcolonialism and Religion, this inaugural volume by Joy and Duggan is both multireligious and transnational. Like it or not, the essays collected in Decolonizing the Body of Christ show that postcolonial studies can no longer be restricted in space, whether in terms of continent, religion, academic discipline, or even the academy itself. The book not only acknowledges the colonial legacy of Christianity but also articulates the colonial reality of the academy. It challenges and invites me to not only broaden my horizon about postcolonial theology and theory but also shift the very framework of my work." - Tat-siong Benny Liew, Pacific School of Religion, USA

"This is a challenging volume, not least because of the diversity of its contributors, who force the reader to pay close attention to their own context and culture . . . Although dense and complex, it is not only a book for scholars, but for anyone engaged in the practices of theology and faith." - Raewynne J. Whitely, St. James Episcopal Church, USA