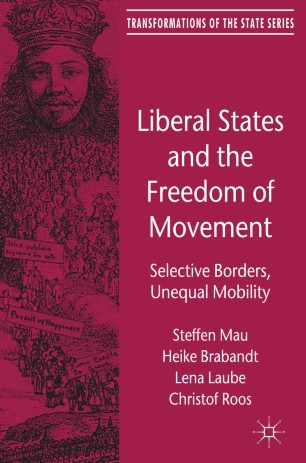 Liberal States and the Freedom of Movement

State borders regulate cross-border mobility and determine peoples' chances to travel, work, and study across the globe. This book looks at how global mobility is defined by borders in 2011 in comparison to the 1970s. The authors trace the transformation of OECD-state borders in recent decades and show how borders have become ever more selective.

STEFFEN MAU Professor of Political Sociology and Comparative Social Research at the University of Bremen, Germany. He works in the fields of European integration, borders and mobility, comparative welfare research and social inequality. His recent publications include Social Transnationalism Lifeworlds beyond the Nation State and European Societies: Mapping Structure and Change (with Roland Verwiebe.)

HEIKE BRABANDT Research Associate at the Collobarative Centre on 'Transformations of the State' at the University of Bremen, Germany. She is interested in the diffusion of international norms and the role of the legal system. She has published on these issues as well as on gendered persecution, human rights and migration.

“The book, published in 2012, is well-researched and competently written. It delineates a much more nuanced picture of cross-border migrations and related state policies than mainstream media and political rhetoric usually allow for. … it should appeal to the cool-minded academic wishing to grasp the mechanisms for inclusion and exclusion that inter-state borders still represent and implement, especially in the so-called developed countries of our planet.” (Giorgio Baruchello, The European Legacy, Vol. 22 (3), 2017)