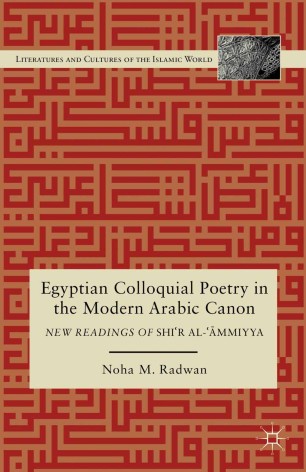 Noha Radwan offers the first book-length study of the emergence, context, and development of modern Egyptian colloquial poetry, recently used as a vehicle for communications in the revolutionary youth movement in Egypt on January 25th 2011, and situates it among modernist Arab poetry.

'Radwan's important study, Egyptian Colloquial Poetry in the Modern Arabic Canon, provides the reader with cogent evidence of the abundant creativity and political significance that Egyptian poets writing in their colloquial dialect project to their society and its audience (and not least following the events of January, 2011). Her study is a welcome and sophisticated insertion of critically-based literature scholarship, both theoretical and applied, into the context of that form of poetic creativity to which the vast majority of speakers of the Arabic language in Egypt regularly respond with the greatest enthusiasm and immediacy. The publication of this study will be a significant addition to the relatively exiguous library of works in English devoted to colloquial poetry from any Arabic-speaking region.' Roger Allen, emeritus professor of Arabic and Comparative Literature, University of Pennsylvania

'This astute study of the emergence of modernist poetry in the Egyptian vernacular treats an important but neglected area of Arabic expressive culture. Considering issues of language use and language politics, and intersections of political culture and literary expression, Radwan offers sensitive readings of three leading vernacular poets who paved the way for today's explosion of colloquial poetry in Egypt and elsewhere.' Marilyn Booth, Iraq Chair of Arabic and Islamic Studies, The University of Edinburgh