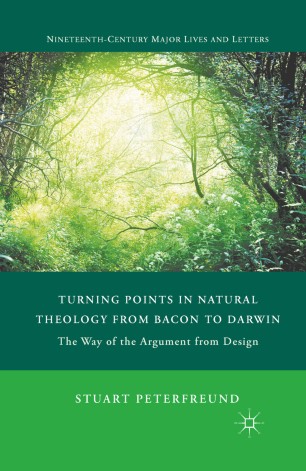 Turning Points in Natural Theology from Bacon to Darwin

The Way of the Argument from Design

Discusses crucial moments in the historical development of natural theology in England from the time of Francis Bacon to that of Charles Darwin. While the argument from design remains the rhetorical method of choice for natural theologians throughout the three centuries in question, the locus and object of design undergo a change.

Stuart Peterfreund is a professor of English at Northeastern University. He is the author of William Blake in a Newtonian World: Argument as Art Argument as Science, and Shelley among Others: The Play of the Intertext and the Idea of Language.

“The book is a useful contribution to studies of science and religion which has relevance to the area of literature and science. … The book is an example of the metahistorical studies which are extremely helpful when trying to understand a body of thought or a discursive practice, but which are rarely attempted today because of the vast cultural knowledge they require.” (Courtney Salvey, British Society for Literature and Science, December, 2015)

"This interesting and original book, a volume in the 'Nineteenth-Century Major Lives and Letters' series, traces key moments in the emergence of natural theology, a meta-scientific philosophy of religion that argues for divine attributes and their relationship to the natural world, including the history of life on Earth and the extinction and evolution of species over time. Focusing on the historical from the early 17th century and philosopher Francis Bacon, through the 19th century and naturalist Charles Darwin, Peterfreund (English, Northeastern Univ.) considers the British meta-scientific discourse community, examining how advocates of natural theology's understanding of systems and design offer a means of tracing the evolving debate on the merits of "intelligent design" (attributions of design to God) in relation to select observable natural phenomena. In five chapters, the author provides a historically situated chronology of rhetorical contributions, highlighting connections among major figures, along the trajectory of natural theology writings and emerging theories of intelligent design - as articulated by Francis Bacon, Robert Boyle, Sir Isaac Newton, William Paley, and Charles Darwin. Readers with an interest in natural theology, creationism debates, and intersections of philosophy, religion, and principles of science will likely find this informative book of interest. Summing Up: Recommended." - Choice

"In this thought-provoking and nuanced study, Peterfreund tracks the changes that the argument from design underwent during the period from Bacon to Darwin. In situating different conceptual metaphors of design in their historical, philosophical, and scientific contexts, Peterfreund makes significant contributions to the interdisciplinary science studies." - Robert Markley, W.D. and Sara E. Trowbridge Professor, University of Illinois