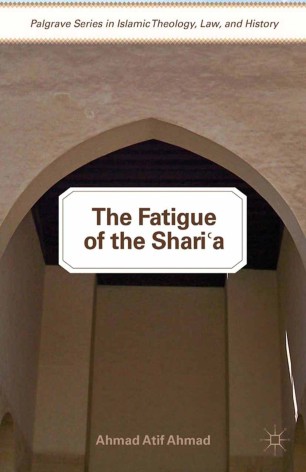 The Fatigue of the Shari‘a

The Fatigue of the Shari'a places on a continuum two kinds of debates: debates in the Islamic tradition about the end of access to divine guidance and debates in modern scholarship in Islamic legal studies about the end of the Shari'a. The resulting continuum covers what access to divine guidance means and how it relates to Shari'a.

"In the past, leading scholars of Islam debated whether humanity could ever lose the kind of divine guidance they received in the revelation of the Qur'an and in the Shari'a. In this insightful and intriguing monograph, Ahmad A. Ahmad documents and analyzes these debates, and he shows why that question is particularly important today and how it can be answered." - Frank Griffel, Professor of Islamic Studies, Yale University

"An engaged and interesting account of the ongoing debate - begun in the medieval era - as to whether the Shari'a will survive until the end of time, Ahmad's book tackles also other significant topics, including the unaided ability of the human intellect to arrive at binding norms. As such, the discussion bears important implications for modern Muslim societies, particularly those which are changing." - Georges Tamer, M. S. Sofia Chair in Arabic Studies,

Near Eastern Languages and Cultures, The Ohio State University