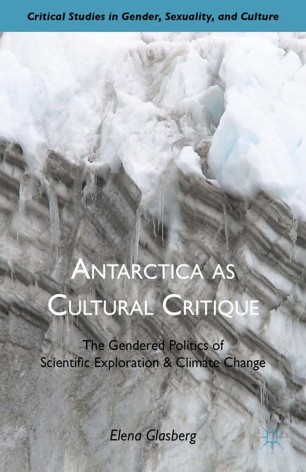 The Gendered Politics of Scientific Exploration and Climate Change

Part of the Critical Studies in Gender, Sexuality, and Culture book series (CSGSC)

Arguing that Antarctica is the most mediated place on earth and thus an ideal location for testing the limits of bio-political management of population and place, this book remaps national and postcolonial methods and offers a new look on a 'forgotten' continent now the focus of ecological concern.

ELENA GLASBERG is Lecturer in the Writing Program at Princeton University, USA.

"Antarctica as Cultural Critique is a witty, imaginative, theoretically-informed explanation of Antarctica as the limit case to United States imperialism. Glasberg's eco-feminist account of Antarctica as a non-territory that aroused the U.S. Imperial state's hysterical efforts to exert total territorial control also explains how this 'little America' at the end of the earth now co-ordinates the psycho-geography of neo-liberal globalization." - Donald Pease, author of The New American Exceptionalism, founding director of the Future of American Studies Institute at Dartmouth

"Elena Glasberg has produced a fecund analysis of Antarctica's past, present and future. In these incisive essays she shows the complex ways in which gender, science, geopolitics, environment, and landscape have engaged with a place so often conceived as a 'pole apart' or 'the last frontier'. Snow, ice and the cold are on the proverbial frontline, and this book implores us to think critically about how the Antarctic has also been caught up in an array of utopian and dystopian fantasies. A tour de force." - Klaus Dodds, author of The Antarctic: A Very Short Introduction (2012) and Pink Ice: Britain and the South Atlantic Empire (2002).

"Glasberg has found the sweet spot in Antarctic studies. This collection of thoughts is a timely and urgently needed reflection on how landscape, gender, and history have intertwined and evolved in one of the most remote - yet eerily also most deeply interconnected - parts of the world.It's a welcome addition to the field of thought in the same context as William L. Fox's Terra Antarctica. A must-read for anyone interested in Antarctica." - Paul D. Miller, aka DJ Spooky, creator of Terra Nova: Sinfonia Antarctica