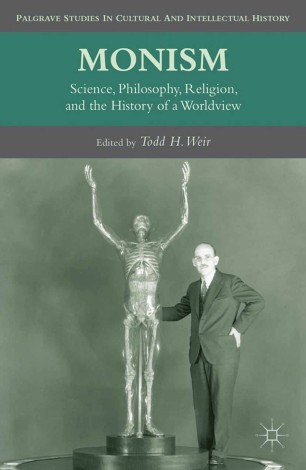 Science, Philosophy, Religion, and the History of a Worldview

The first survey in the English language of the history of naturalistic monism in the works of Haeckel, Spinoza, and others. Contributors demonstrate that, to a greater extent than previously shown, monism provided an essential epistemological framework for numerous religious, political and cultural movements between the 1840s and 1940s.

Todd H. Weir is Lecturer in Modern European History at Queen’s University Belfast. His research is currently focused on the relationships between religious dissent, anticlericalism, popular science and radical politics in modern Germany. He has been a Fellow of the Berlin Program for Advanced German and European Studies and Visiting Scholar at the Simpson Center for the Humanities at the University of Washington. He is currently completing a monograph entitled The Fourth Confession: Organized Secularism in Nineteenth Century Berlin.

'Monism is a devilish shapeshifter. This volume takes up the challenge of recognizing and analysing monism in a wide diversity of forms, from the early nineteenth century to 1945. Collectively, its authors deepen the discussion of monism as a worldview while extending our understanding of its philosophical, social and political locations.' - German History

'This set of wonderfully probing essays greatly deepens our understanding of monism as both intellectual movement and cultural mood. The expansive scope of the monist empire is matched by an interdisciplinary range of authors who collectively deliver a remarkable interrogation of a subject much in need of renewed scrutiny. In a time when monism snakes its way through a good deal of both popular science and New Age spirituality, this careful reassessment of its diverse historical trajectories is most welcome.' David N. Livingstone, author of Putting Science in its Place, and Adam's Ancestors: Race, Religion and the Politics of Human Origins

'The contributors pull out of obscurity a world-view that aimed at overcoming the philosophical tradition of separating mind and matter, only to enjoy considerable popularity, especially in the German-speaking world, after 1840 and well into the twentieth century. The collected essays provide ample evidence for connecting monist ideas with broader strands of popular science and indicate, too, a renewed interest in anti-dualistic philosophies today. Monism thus appears in this volume as a set of ideas, always radiating into in the public arena, whose analysis can effectively connect questions from the history of science and a broadly conceived intellectual history.' Andreas W. Daum, professor of History, State University of New York at Buffalo

'This fascinating collection of essays explores the origins of monism in nineteenth-century Germany and its impact on biology, medicine, eugenics, feminism, philosophy, and religion up through the 1940s, including in the Soviet Union and the Third Reich. This volume is a major contribution to European intellectual history, highlighting the vitality and influence of a movement that operated along the boundaries between idealism and materialism, academic and popular science, secularism and established religion, and right and left-wing forms of collectivism and dissent.' George S. Williamson, author of The Longing for Myth in Germany: Religion and Aesthetic Culture from Romanticism to Nietzsche