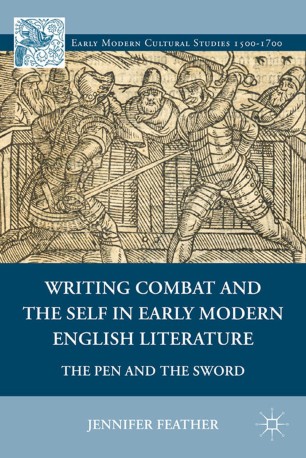 The Pen and the Sword

By examining these competing depictions of combat that coexist in sixteenth-century texts ranging from Arthurian romance to early modern medical texts, this study reveals both the importance of combat in understanding the humanist subject and the contours of the previously neglected pre-modern subject.

Jennifer Feather is Assistant Professor of English at the University of North Carolina, Greensboro.

'Feather's compelling book considers the centrality of armed combat and physical suffering to English Renaissance literature. Arguing that medieval understandings of corporeality and combat functioned as crucial materials for English self-definition, she offers bold readings of texts drawn from a wide array of genres, including drama, poetry, romance, epic, and chronicle history. An impressive and theoretically sophisticated work.' - Patricia Cahill, associate professor of English, Emory University and author of Unto the Breach: Martial Formations, Historical Drama and the Early Modern Stage

'Combat is the situation where the self appears in its most violently assertive expression and at the same time in its greatest vulnerability to the risk of extinction. Feather's remarkably original treatment of this largely ignored topic reveals the early modern self in it most extreme manifestation in the world.' Michael Bristol, Greenshields Professor Emeritus of English, McGill University

'This volume presents a theoretically sophisticated examination of the language of violent contest in a broad range of significant cultural texts. Feather encourages us to recognize the agonistic violence in medical discourse and to rethink the relation between violence and humanism. This important work demonstrates how shifting conceptions of violent struggle formed the basis of self-definition in the complex transition between medieval and early modern subjectivities.' - Jennifer Low, author of Manhood and the Duel: Masculinity in Early Modern Drama and Culture