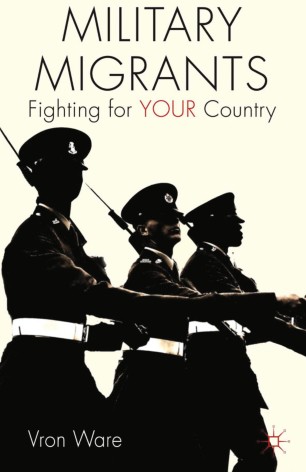 Fighting for YOUR Country

This is the first book to examine "migrant-soldiers' in the British army and places the phenomenon of Britain's multicultural army in relation to British culture, history and nationalism. It also explores the impact of war on UK society during the 21st Century

Vron Ware is Professor of Sociology and Gender Studies at Kingston University, UK.

"Riveting and nuanced.' - The Observer

"Military Migrants is a 'must read' for people who care about the realities behind the rituals of our militaries. Vron Ware has done such innovative research. The men and women - from Fiji, Nepal, Jamaica, Belize, Ghana - whom the British military recruit to fight Britain's wars come alive on these pages. They have ideas and aspirations and savvy assessments of their own. This is a brilliant book." - Cynthia Enloe, Clark University, USA

"This stunning and beautifully written book is essential reading for anyone interested in the multicultural question today." - Les Back, Goldsmiths, University of London, UK

'The UK Armed Forces reflect the history of the British Empire. This book shows how the British Army in particular has mobilized Foreign and Commonwealth migrant soldiers to serve, what happens to them when they do and after they leave. It is a timely, well written book as the UK and the British Army continue to grapple with what it means to be British in a globalised and multi-cultural world.' - Christopher Dandeker, Kings College London, UK

'So tight is the grip of nationalist mythologies that few realize just how ubiquitous foreign military service is in the modern world. Vron Ware has produced a rich and comprehensive portrait of the experiences of Britain's foreign soldiers and their families. Inequities in pay and conditions, murky immigration statuses, racism, and the quirks of British military culture are all part of the story Ware renders in vivid ethnographic and sociological registers.'

'If we are what we defend, then Military Migrants takes us to the heart of how we are defended and what this means. It is both a careful, scrupulous book and a riveting journey through our own country as it literally brings home to the reader how the country is taking new shapes while resisting change.' - Anthony Barnett, founder of openDemocracy

"The treatment of Foreign and Commonwealth soldiers within the British Armed Forces is being hotly debated, so the publication of this important work will help generate vital debate!" Dr Hugh Milroy, Chief Executive, Veterans Aid, UK

'The ways in which state power attempts to use migration to reinforce its authority are brilliantly explored in Military Migrants. Teeming with unexpected human stories, and showing what we can learn about subjects that might seem closed to scholarly study, Ware's book is a vital meditation on the nation, race, and citizenship.' - David R. Roediger, Contexts, American Sociological Association

'Vron Ware presents a wealth of first hand experience and insights into the rhetoric and reality of army life. This is a book that explains how attempts to modernise the military intersect with hard-to-shift attitudes and more pragmatic needs for recruitment. It is essential reading for understanding the armed forces today and their promotion to the centre of British life over the last ten years.' - Emma Sangster, ForcesWatch, UK

'Military Migrants raises our awareness of and personal encounters with militarism ... The deft weaving of narrative and material culture, articulated through an incisive historical record of defence policy, interacting with civil movements, is expressed with an extraordinary attention to detail, without ever losing track of the broader argument or narrative.' - Ben Wadham, Flinders University, Australia

'An excellent introduction to the political manipulations around citizenship, nationhood, identity and racism in Britain today, and how these structure the working lives and experiences of Commonwealth citizens recruited to the contemporary British Army. This book provides the definitive assessment of what militarised multiculture means for those recruited internationally to fight Britain's war. Anyone wanting to understand how civil-military relations work in contemporary Britain needs to read this book.' - Rachel Woodward, Newcastle University, UK

"The bittersweet readability of this book lies in the soldiers' stories. More enlightened military officers and ranks, as well as defence experts, will respect this book for its uncompromisingly rigorous research; this is the definitive work on its subject." - Ed Vulliamy, The Observer