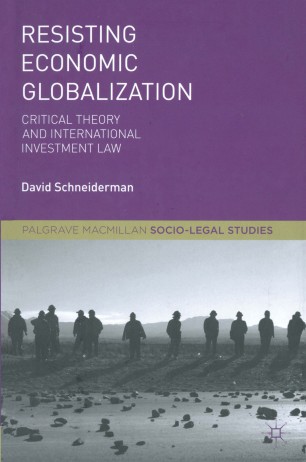 There is at present much disenchantment with the rules governing international investment. Conceived as a set of disciplines establishing thresholds of tolerable state behaviour, dissatisfaction has precipitated acts of resistance in various parts of the world.

Resisting Economic Globalization explores the magnitude of the legal constraints imposed by these rules and institutions associated with the worldwide spread of neoliberalism. Much contemporary theorizing has given up on national states as a locus for countering the harmful effects of economic globalization. Though states provide critical supports to the construction and ongoing maintenance of transnational legal constraints, David Schneiderman argues that states remain crucial sites for resisting, even rolling back, investment law disciplines. Structured as a series of encounters with selected critical theorists, the book contrasts theoretical diagnoses with recent episodes of resistance impeding investment law edicts.

This novel approach tests contemporary hypotheses offered by leading political and legal theorists about the nature of power and the role of states and social movements in facilitating and undoing neoliberalism's legal edifices. As a consequence, the foundations of transnational legality become more apparent and the mechanisms for change more transparent.