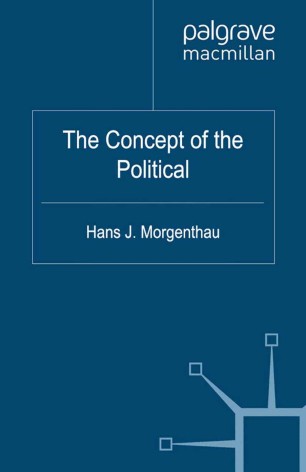 The Concept of the Political

A growing interest in the oeuvre of Hans J. Morgenthau and in re-readings of 'classical realism' increases the significance of his European, pre-emigration writings in order to understand the work of one of the founding figures of IR. This book is the first English translation of Morgenthau's French monograph La notion du politique from 1933 (translated by Maeva Vidal).

'The Concept of the Political is Morgenthau's initial attempt to distinguish the political from the legal and to conceptualize the political as a distinct realm of human affairs. After all these decades, it is finally available in English, and in an excellent translation. Equally valuable is the thorough and thoughtful Introduction by the editors that locates the work in its intellectual and political milieu and discusses the role in played in its author's intellectual development.' - Richard Ned Lebow, James O. Freedman Presidential Professor, Dartmouth College

'Hans J. Morgenthau was far more than an advocate of power politics. A full appreciation of his nuanced version of realism cannot be gained, however, without easy access to his early European writings and an accurate understanding of the context in which they were written. Despite some initial steps in that regard, much work remains to be done. With the publication of this careful translation of Morgenthau's La notion du 'Politique,' the editors render an essential service to English-speaking students of international relations and political theory.' Professor Christoph Frei, University of St Gallen