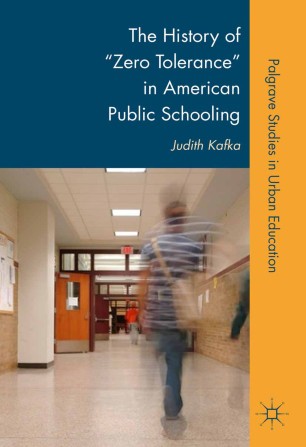 The History of “Zero Tolerance” in American Public Schooling

Through a case study of the Los Angeles city school district from the 1950s through the 1970s, Judith Kafka explores the intersection of race, politics, and the bureaucratic organization of schooling. Kafka argues that control over discipline became increasingly centralized in the second half of the twentieth century in response to pressures exerted by teachers, parents, students, principals, and local politicians - often at different historical moments, and for different purposes. Kafka demonstrates that the racial inequities produced by today's school discipline policies were not inevitable, nor are they immutable.

"Kafka writes an admirable history of zero tolerance policies and practices in urban education . . . While doing so, she exposes controversies among academic and therapeutic concerns, overweening bureaucratic entanglements, the changing nature of teacher-student and teacher-family relationships, and the trend toward discipline as punitive rather than educative. . . The author's precise archival research highlights urban patterns that would become public and glaring decades later . . . Highly recommended." - Choice

"The History of Zero Tolerance in American Public Schooling is an important scholarly contribution to the history of American education.It will undoubtedly serve as a guidebook for scholars studying school discipline for many years to come.Using Los Angeles as a case study to anchor her work, Kafka demonstrates how an often irrational fear of violence has served as an impetus for highly punitive discipline policies in schools.Supported by extensive historical research, this book should also help policymakers and educators to question some of the assumptions about the nature of violence in school that have led to the draconian policies we now have in many places.It should also prompt the reasonable among us to ask whether the remedy (zero tolerance) may be worse than the ailment it was designed to address." - Pedro A. Noguera, Peter L. Agnew Professor of Education, Steinhardt School of Culture, Education and Development, Executive Director, Metropolitan Center for Urban Education, New York University

"Judith Kafka has produced our first sophisticated, archives-based account of modern school discipline in the United States. Even more, Kafka provides the first truly historical explanation for the rise of so-called 'zero-tolerance' policies in the schools. No matter what you think of these policies - and Kafka is deeply critical of them - you will have to read this book to understand them. I hope it garners all of the attention that it so richly deserves." - Jonathan Zimmerman, Professor of Education and History, New York University

"Judith Kafka has given us a remarkable account of shifting discipline policies in American schools, with particular attention to the nation's second largest city, long neglected by historians of education. It represents a significant contribution to our understanding of changes in urban education across the twentieth century, especially during the crucial decades following 1950, precursors to the current crisis in big city schools." - John L. Rury, Professor of Education and (by courtesy) History, University of Kansas