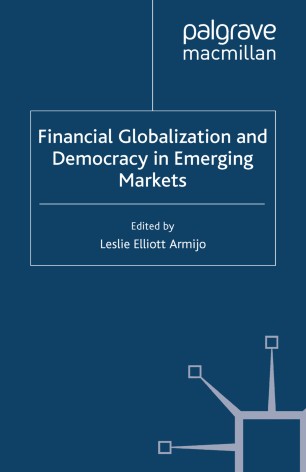 When Mexico's peso crisis occurred in December 1994, all of Latin America experienced the 'tequila effect'. In January 1998, after seven months of financial turmoil in East Asia, Alan Greenspan, the usually reticent Chairman of the US Federal Reserve Bank, noted that such 'vicious cycles...may, in fact, be a defining characteristic of the new high-tech international financial system'. This book examines the impact of the new, highly liquid portfolio capital flows on governments, opposition, politicians, business and the workforce in such emerging market countries as Mexico, Brazil, Russia, Indonesia, Vietnam, Thailand and Indonesia. Hailed as 'exemplary and innovative', 'fine-grained and accessible' and 'a must read', this collection of original essays in newly available in paperback.

LESLIE ELLIOTT ARMIJO is Visiting Scholar, Reed College, Oregon, USA. She has published numerous articles on the interaction of democratization and economic liberalization in developing and transitional countries, the game of inflation in Brazil, and the politics of privatization and market-oriented economic reforms in South America, Mexico, and India.