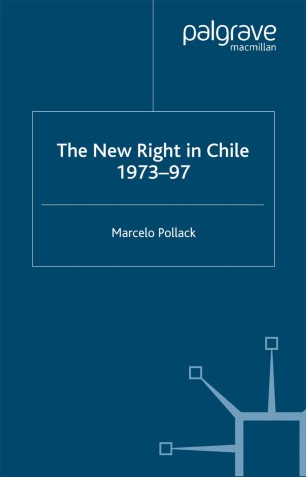 The 1973 military coup gave previously peripheral elements of the right the opportunity to exercise almost unlimited political and economic power. However, with the return to democracy in 1990, the right had to adapt to electoral politics. This book examines whether it is conforming to the rules of the electoral game.

MARCELO POLLACK has been Research Associate at the Madrid-based Institute for European-Latin American Relations (IRELA) since 1996. Previously, he was Latin America and Africa Editor for Oxford Analytica, a UK-based international consultancy firm. He has specialized in Chilean politics for the last 10 years and has written a number of articles on the subject and has contributed to Idealogues and Ideologies in Latin America; Neo-Liberalism with a Human Face? The Politics of the Chilean Model; and to a special issue of Parliamentary Affairs.