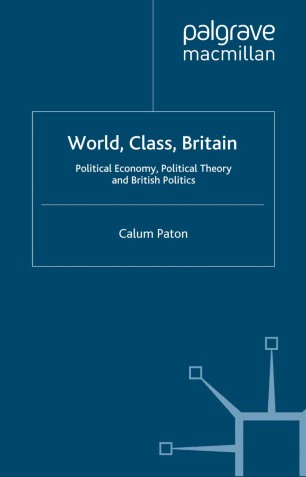 This book begins by tracing the sea-change in British politics from the 1970s to the end of the twentieth century. The dominance of market ideology, the decline of social democracy and the 'marketization' of public policy are related to a widespread acceptance of globalization. Contemporary global capitalism is analyzed, not least as to its likely effect on countries such as Britain. New Labour's 'Third Way' is portrayed as reinforcing the apparent inevitability of globalization. In this environment, political and economic alternatives tend to be dismissed fatalistically. Politics is no longer about real choice. The second part of the book, as well as sketching an economic alternative, investigates how political theory and ethical concepts can help us today to re-establish the search for human freedom and a 'balanced' society. Such a vision can appeal to conservatives, liberals and socialists alike. It argues that a political coalition to further such ends is conceivable, if very difficult to organise or maintain. Finally, the 'postmodern' stance of eschewing ethical and political progress is criticized.

CALUM PATON is Professor of Health Policy at the Centre for Health Planning and Management, Keele University.