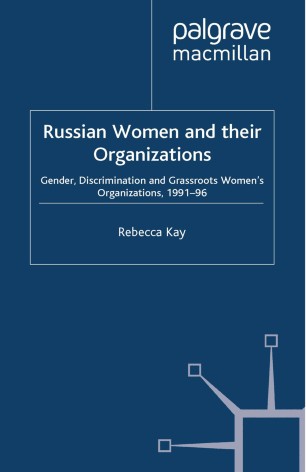 Russian Women and their Organizations

Grassroots Russian women's organizations faced multiple challenges in the early 1990s. Like their members, they were confronted with both potentially hostile attitudes and numerous practical difficulties. Post-Soviet ideologies of gender difference produced a gender climate which was particularly unsympathetic to female activism in support of other women. This book presents a detailed study of grassroots Russian women's organizations in 1991-96, against the background of a careful analysis of gender relations and attitudes to women's place in post-Soviet Russian society.

Rebecca Kay is Lecturer at the Center for Russian and East European Studies at the University of Birmingham.

'This book makes a unique contribution to an understanding of the complexities of women's lives in post-Soviet Russia. Through extensive in-depth interviews with members of little-known grassroots organizations, the author reveals the contradictions and ambiguities of Russian attitudes to gender and shows how far Soviet ideology and policy continue to influence present-day behaviour. She vividly analyses women's attempts to reconcile the conservative attitudes peddled by much of the Russian media with the new demands of an emerging market economy. Most of all, Dr Kay challenges the notion that women are simply victims of the reform process by depicting their enterprise, determination and creativity in developing local and national organizations to meet women's needs. This lively and thought-provoking study brilliantly captures the flavour of a difficult, challenging, but fascinating period of change for women in Russia.' - Sue Bridger, Reader in Russian Studies, University of Bradford

'This is the first detailed study of gender relations and the women's movement in Russia in the years following the collapse of the Soviet Union. It is excellently researched and coherently argued, with a clear understanding of current feminist theory. Rebecca Kay reports on the aims and achievements - and equally the disagreements and failures - of women's organizations in an often hostile 'gender climate'. Her perspective is not only that of a sympathetic and well-informed outsider. She is alert to the similarities as well as the differences between Russia and the West and shows how an understanding of the problems faced by Russian women in an era of great turmoil and uncertainty can shed light on gender relations much nearer home. The book is very readable and should appeal to specialists, students and anyone interested in contemporary feminist issues.' - Linda Edmondson, Research Fellow, Centre for Russian and East European Studies, University of Birmingham