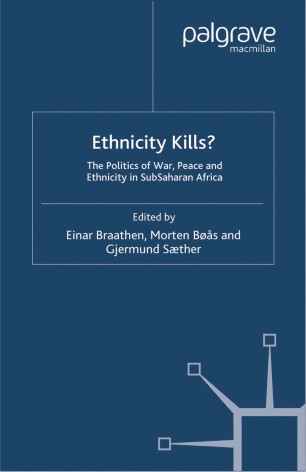 The Politics of War, Peace and Ethnicity in SubSaharan Africa

The book examines, among other issues, the emergence of civil war as a result of political struggles. The construction of Africa as the 'other' has meant that factors commonly used to explain war elsewhere have been neglected in SubSaharan Africa. The political power struggle which evolved around the state is at the forefront of the analysis of civil war and societal conflict.

EINAR BRAATHEN works for the Comparative Research Programme on Poverty (CROP) and the Norwegian Institute for Urban and Regional Research (NIBR). He was Research Fellow (Research Council of Norway) at the University of Bergen..

MORTEN BOÅS is Research Fellow at the Centre for Development and the Environment, University of Oslo.

GJERMUND SAETHER is a political scientist and former University Lecturer at the Eurofaculty, University of Tartu. He joined the Norwegian Ministry of Foreign Affairs as a diplomatic trainee and is currently posted in Vienna.