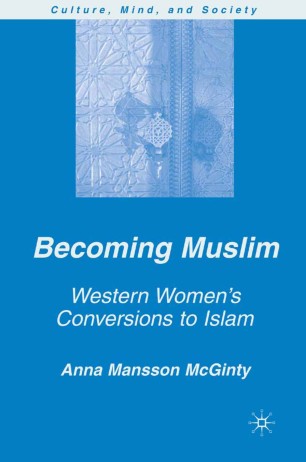 While Islam has become a controversial topic in the West, a growing number of Westerners find powerful meaning in Islam. Becoming Muslim is an ethnographic study based on in-depth interviews with Swedish and American women who have converted to Islam.

ANNA MANSSON McGINTY is Lecturer in Anthropology and Women's Studies at University of Wisconsin-Milwaukee, USA.

'Becoming Muslim is a fresh and fascinating and study of American and Swedish converts to Islam. Mansson McGinty provides an original and insightful analysis of diverse conversion experiences, their spiritual dimension and the interaction of faith and identity in the ongoing process of identity construction.' - John L. Esposito is University Professor, Georgetown University; Author of What Everyone Needs to Know about Islam and Unholy War: Terror in the Name of Islam

'Becoming Muslim is essential reading for anyone interested in conversion processes, contemporary Islam, and the intricate dynamics of human change. Through in-depth interviews with nine remarkable women (six Swedish and three American), anthropologist Mansson McGinty takes us into the worlds of these diverse women as they share their fascinating, complex journeys to Islam. Given the troubled history of Christianity and Islam and the after effects of September 11, 2001, many stereotypes and hostilities distort our understanding of one another. In addition, seeing Muslim women wearing veils conjures images of submissive, denigrated women. Some are outraged and perplexed by the idea that any woman could voluntarily become a Muslim. If, however, one reads Mansson McGinty's excellent book, one can gain a deeper understanding of the multifaceted, ongoing pilgrimage of how and why these women were and are becoming Muslim. Readers of this book will be impressed by Mansson McGinty's sophisticated scholarship and her nuanced engagement with these Muslim women.' - Lewis R. Rambo, San Francisco Theological Seminary and the Graduate Theological Union, Berkeley; Author of Understanding Religious Conversion

'Mansson McGuinty approaches the topic with sensitivity providing new insights into the spiritual quest of Western women who convert to Islam. A must read for anyone interested in the transformative power of conversion and the alternative path Islam is offering women in North America and Europe.' - Yvonne Y. Haddad, Professor of History of Islam and Christian Muslim Relations, Georgetown University, USA

'The book shows how the women's adoption of Muslim identities and worldviews changed their sense of self and perception of reality. These changes are illustrated by an insightful examination of how the women expressed and analyzed their views on key issues, including spirituality, gender relations, veiling, and the meaning of social justice. This sensitively written book on an important topic deserves a wide readership.' - A. Rassam, Choice Magazine