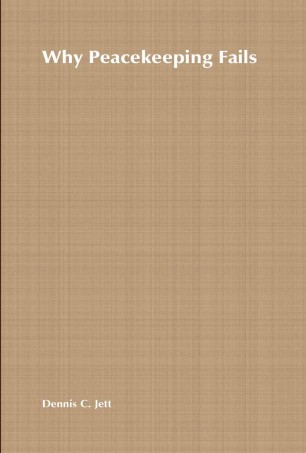 Dennis C. Jett examines why peacekeeping operations fail by comparing the unsuccessful attempt at peacekeeping in Angola with the successful effort in Mozambique, alongside a wide range of other peacekeeping experiences. The book argues that while the causes of past peacekeeping failures can be identified, the chances for success will be difficult to improve because of the way such operations are initiated and conducted, and the way the United Nations operates as an organization. Jett reviews the history of peacekeeping and the evolution in the number, size, scope, and cost of peacekeeping missions. He also explains why peacekeeping has become more necessary, possible, and desired and yet, at the same time, more complex, more difficult, and less frequently used. The book takes a hard look at the UN's actions and provides useful information for understanding current conflicts.

DENNIS C. JETT entered the foreign service in 1972 and has served in Argentina, Israel, Malawi, Liberia, Mozambique and Peru. Before becoming Ambassador to Peru, he was Ambassador to Mozambique. Jett received his PhD from the University of Witwatersrand in Johannesburg, South Africa.