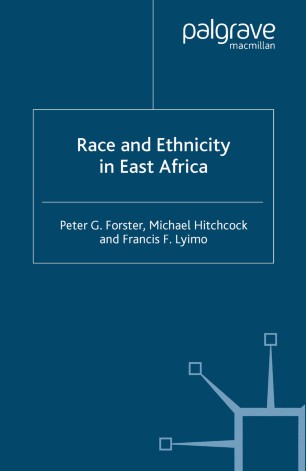 Race and Ethnicity in East Africa

Race and ethnicity continue to be important, if unwelcome, factors in modern politics. This is evident in East Africa: the ethnic factor is often dominant in multi-party elections, while in Rwanda and Burundi bloodshed and genocidal attacks have been linked to ethnic difference. This book examines the phenomena of race and ethnicity in general, but with particular reference to Africa, especially the East. The impact of non-indigenous groups is considered, together with ethnic differences between Africans. The relevance of tourism and religion is also examined.

DR PETER G. FORSTER is Senior Lecturer in Sociology and Anthropology, University of Hull, where he has taught since 1966, except for a secondment to the University of Malawi for the period 1978-81. His other main works include The Esperanto Movement, T. Cullen Young: Missionary and Anthropologist, The Tanzanian Peasantry (co-editor) and Swaziland: Contemporary Social and Economic Issues (co-editor).

DR FRANCIS F. LYIMO is Lecturer in Sociology, University of Dar es Salaam. He is co-editor of The Party Policy and its Implementation and The History of the TANU Party, 1954-77.