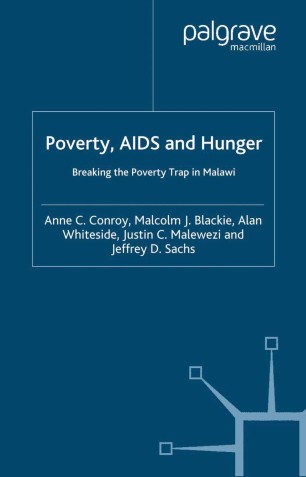 Breaking the Poverty Trap in Malawi

Using the experiences of Malawi, one of the poorest countries on the African continent, to illustrate both the challenges that poverty creates, and the opportunities for change that exist. Poverty, AIDS and Hunger outlines an easily-replicable model, at modest cost, that could lift people quickly out of poverty, with sustainable benefits.

ANNE C. CONROY went to Malawi in 1987 with Voluntary Services Overseas where she worked as Evaluation Officer in Lilongwe Agricultural Development Division. Completing her PhD on constraints to access of hybrid seed and fertilizer she then worked as Food Security Advisor to Malawi's Minister of Finance (1994-98) and thereafter as Advisor to the Vice President on food security, health and HIV/AIDS. She currently advises the Irish government on their aid programme to Malawi.

MALCOLM J. BLACKIE has worked with African smallholders most of his professional life. He was founding professor of agricultural economics at the University of Zimbabwe and was there responsible for the development of the new Faculty of Agriculture. He set up the Rockefeller Foundation Agricultural Programme in Southern Africa and remains actively involved in working on agricultural development issues in Africa.

ALAN WHITESIDE is Director of Health Economics and HIV/AIDS Research Division at the University of KwaZulu-Natal, South Africa, which he established in 1998. He was previously Commissioner on the United Nations Commission on HIV/AIDS and Governance in Africa (2002-06). He is co-author of AIDS in the Twenty-First Century.

JUSTIN C. MALEWEZI served as Vice President of the Republic of Malawi between 1994 and 2004 and is currently a Member of Parliament. He has been instrumental in leading the Malawi response to HIV and AIDS both at official and political levels. He continues to be involved in issues of HIV and AIDS and related areas at regional and international levels.

JEFFREY D. SACHS is Director of The Earth Institute at Columbia University, USA and Director of the United Nations Millennium Project. He has worked widely with international agencies on problems of poverty reduction, debt cancellation and disease control for the developing world. He is author of The End of Poverty: Economic Possibilities for Our Time, Macroeconomics in the Global Economy and Development Economics.