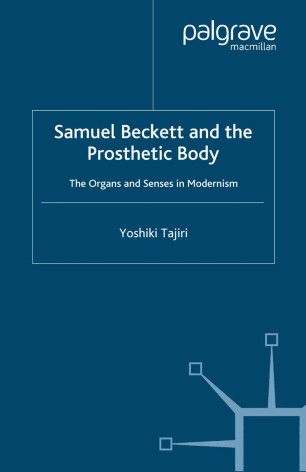 The Organs and Senses in Modernism

This book studies the representation of the body in Beckett's work, focusing on the 'prosthetic' aspect of the organs and senses. While making use of the theoretical potential of the concept of 'prosthesis', it aims to resituate Beckett in the broad cultural context of modernism in which the impact of new media and technologies was registered.

YOSHIKI TAJIRI is Associate Professor of English at the University of Tokyo, Japan. He has written extensively on Samuel Beckett and Twentieth-century English Literature. He has also translated Beckett's Dream of Fair to Middling Women into Japanese and edited a Japanese book on J.M. Coetzee.

'The book...is valuable and stimulating in addressing a host of largely neglected aspects of Beckett's writing. Tajiri's book is also a good example of the third wave of Beckett criticism that productively combines a form of empiricism with informed theoretical analysis.' - Ulrika Maude, Modernism/Modernity

'This is an exemplary and often brilliant study, notable for its demonstration of the sheer productivity of prosthesis as analytical tool...It is lucidly and persuasively written. It is a study to which I, for one, will be returning frequently.' - Mary Bryden, The Beckett Circle