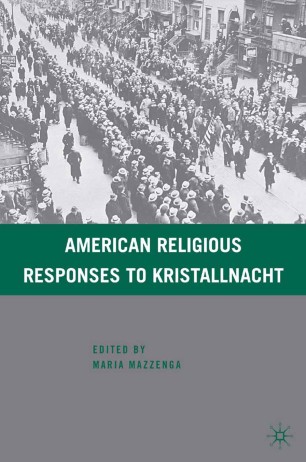 This book examines how American Protestants, Catholics and Jews responded to the persecution of Jews in Germany and German-occupied territory in the 1930s. The essays focus on American religious responses to Kristallnacht and represent the first examination of multi-religious group responses to the beginnings of the Holocaust.

"This volume is one of the first in decades to explore the impact of religion on American responses to the Holocaust. The book's greatest strength lies in new evidence from U.S. religious periodicals and archives typically not consulted by Holocaust scholars; for example, the archives of the Catholic University of America, the Center for Migration Studies, Union Theological Seminary, and the Presbyterian Historical Archive. American Religious Responses to Kristallnacht demonstrates the promise that heretofore untouched primary source material generated by U.S. religious groups and institutions holds for scholarship on American responses to Nazism. For this, Dr. Mazzenga and the volume's contributors are to be congratulated." - Suzanne Brown-Fleming, Center for Advanced Holocaust Studies, United States Holocaust Memorial Museum