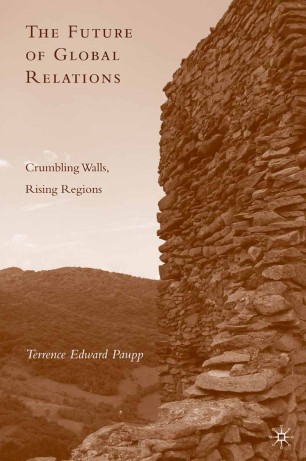 The Future of Global Relations

The collapse of US global hegemony means that the future of global relations will be defined by an integrated and mutually co-operative world order of regions in which there are multiple centres of power. These centres will continue to mature under the ideology of 'regionalism' and through the long historical process of 'regionalization'.

TERRENCE EDWARD PAUPP is Senior Research Associate at the Council on Hemispheric Affairs (COHA), Washington, D.C., USA and Vice President of North America for the International Association of Educators for World Peace (IAEWP).

"A sober reckoning of the overall situation makes the outlook for the human future bleak and catastrophe-prone. Against such a background of dismal conjecture, this remarkable book by Terrence Paupp is little short of an intellectual miracle." - From the Foreword by Richard Falk

"In The Future of Global Relations, Terry Paupp provides a compelling analysis of the decline of American hegemonism and the rise of a new international order dominated by multiple centers of power. The book is especially valuable in describing the new landscape of regional organizations and alliances that are playing an ever more significant role in world affairs, and in identifying the more pluralistic norms and values that must characterize international behavior a world of multiple, interdependent actors." - Michael Klare, Five College Professor, Hampshire College, Amherst

"This is a masterful work that should be distributed widely. Anyone addressing possible future world orders should start by considering Paupp's descriptions and prescriptions." - Brian J. Foley, Visiting Associate Professor, Boston University School of Law

"My first reaction to Paupp's book was "WOW". He has looked at the terrifying situation in which we live directly and squarely without flinching." - Marc Raskin, Co-founder of the Institute for Policy Studies and Professor in the Stephon Joel Trachtenberg School of Public Policy and Public Administration of George Washington University

<"Paupp gets it right in this book. The American Century of unipolar control is over. The cost, the arrogance, and the rise of regional "multi-polar" powers are fast replacing the post-WWII U.S. strategy of confrontation and domination. President Obama should read this book as he tries to fix the collapsing U.S. economy.Paupp clearly suggests that continued military "hegemony" is not sustainable. Better Obama join the growing cooperative global mood by converting U.S. military production to technologies like rail, wind, and solar that will help deal with the coming harsh reality of climate change. Anyone who wonders where the world is heading should read this book." - Bruce K. Gagnon, Global Network Against Weapons & Nuclear Power in Space
Buy options