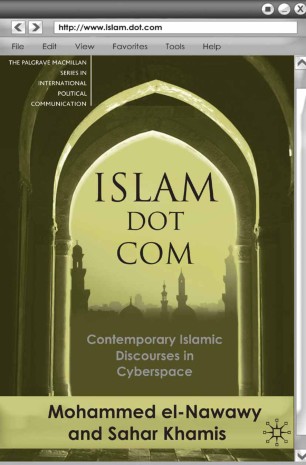 This book analyzes the discourses and deliberations in the discussion forums of three of the most visited Islamic websites and investigates the extent to which they have provided a venue for Muslims to freely engage in discussion among themselves and with non-Muslims about political, economic, religious and social issues.

'Undoubtedly this book makes an important contribution to the existing literature on Islam and the Internet. Its lucid discussion of theoretical issues will be an indispensible resource for students and researchers in this field.' - Eugenia Siapera, The American Journal of Islamic Social Sciences

'Islam dot com provides an account of the virtual Muslim public sphere characterized by unprecedented conceptual and empirical richness. By transcending a narrow focus on the Internet as a space of radical foment and by drawing on a unique combination of English and Arabic source sites, Nawawy and Khamis show that contestation and deliberation over religious authority and Muslim identity constitute the heart of Islam online. Compelling and vital reading.' - Peter Mandaville, PhD, Associate Professor of Government & Politics, Co-Director, Center for Global Studies, George Mason University, USA

'Islamic websites have become a primary vehicle for thinking about Islam in public, and Islam dot com tackles the central issue of how they shape mainstream Muslim thought. Nawawy and Khamis's approach persuasively suggests how to think about 'electronic' Islam for years to come.' - Dale F. Eickelman, co-editor of New Media in the Muslim World: The Emerging Public Sphere (2002)

'As the use of the internet rapidly spreads in Arab and Muslim countries, the expanding Islamic discourse and changing notions of Islamic identity are increasingly important issues that have not been sufficiently captured. Professors el-Nawawy and Khamis provide an important window into this discourse as it appears on three of the most popular Islamic web sites. Both the rich description and the thoughtful analysis help fill a large gap in this emerging literature.' - Shibley Telhami, Anwar Sadat professor for Peace and Development, University of Maryland, Senior Fellow, The Brookings Institution

'Those interested in international communication, and specifically communication in the Arab world, have been blessed with a wealth of new information via academic journal articles and books in the past few years. Mohammed el-Nawawy (co-author of a well known book about Al Jazeera) and Sahar Khamis are offering new insight about Arab- and Islamic-world communication in this book by examining discourse on Islamic-oriented web sites.Several studies have examined mass media discourse in the Middle East, but this is the first study I know of that ambitiously examines discourse via new media. Indeed, the authors, both U.S.-based academics with Arab-world roots, are especially well qualified to undertake this research. This examination of what is being discussed in cyberspace among those following Islam reveals a fascinating view of how new media are being used in the Arab/Islamic world.' - Douglas A. Boyd, University of Kentucky, USA