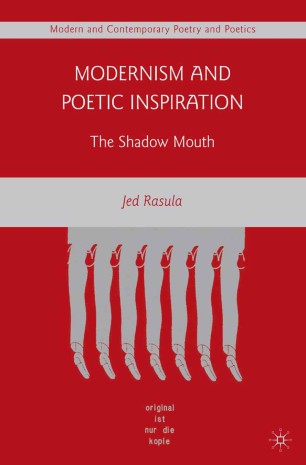 JED RASULA is Helen S. Lanier Distinguished Professor of English at the University of Georgia, USA.

"[F]or those who understand a poem as an epistemological form of knowing, this study will be a pleasure. Highly Recommended." - CHOICE

"Poetry, which once seemed obsolete, lives on because the moment to realize it was missed. As Jed Rasula in Modernism and Poetic Inspiration: The Shadow Mouth makes clear, poetry is an archaic technology that emerges the moment the Muses "dictate directly into the inner ear or mind" (98). Rasula presents this primal "voice-over" as not "a beginning of" but "a split from," where all subsequent "episodes retain a sense of incommensurability between voice and voice-over" (100). Such rifts are as unsettling as they are rich. Aesthetic myths underwrite modernist aesthetics to the exact extent modernism obscures this. Rasula does not mean to change this, but, like one acquainted with the facilities, to give us the password for wifi. This then is a welcome addition to Rachel Blau DuPlessis excellent Modern and Contemporary Poetry and Poetics series." - Jacket2

"Facing the dark mouth of poetic inspiration, Hugo s prophetic bouche d ombre, Rasula does not stand in awe; instead, he decides to organize tours of the cave. Acting as a spirited and indefatigable guide, armed with an inexhaustible fund of anecdotes, great quotes and illuminating readings, he invites us to overhear an infinite conversation linking poets, poems and poetics of an ageless modernity. Hence the mouth will not only speak to you but sing and murmur, echoing with the rich polyphony of thought." - Jean-Michel Rabaté, Vartan Gregorian Professor in the Humanities at the University of Pennsylvania

"From Orpheus to Echo, sphinxes to medusae, Rasula unveils the varied guises of the Muse, and in the process - precise and anarchic - he finally accounts for how the avant-garde leapt so nimbly from the mythopoetic to the postmodern. With his signature stylistic flair and incendiary flares, poetry's fiercest champion of intelligence has produced another work of - dare one say it? - inspiration." - Craig Dworkin, University of Utah

"In this intense and wide-ranging set of ruminations about the sources and resources of poetic inspiration, Rasula takes into account such mechanisms of the muse as the murmur, the voice-over, the lucky break, and the erasure. His compelling subject is the protocols, echoes, and legacies of mythopoesis from Hesiod to modern mass media, from Orpheus to the Internet." - Adalaide Morris,John C. Gerber Professor of English, University of Iowa

"Everything Rasula writes is endlessly fascinating and marvelously illuminating. The proof of his work is in its extraordinary details, but the significance is in the stunning constellation he creates with these details. Modernism & Poetic Inspiration is an immensely original, playfully digressive, and sumptuously engaging work." - Charles Bernstein, Regan Professor of English andComparative Literature, University of Pennsylvania