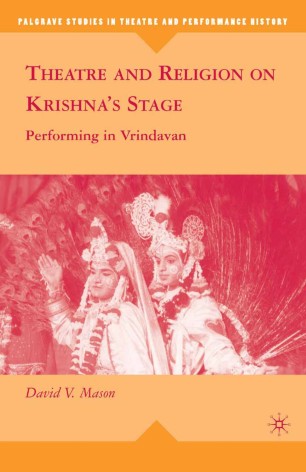 Theatre and Religion on Krishna’s Stage

Theatre and Religion on Krishna s Stage examines the history and form of India's râs lila folk theatre, and discusses how this theatre functions as a mechanism of worship and spirituality among Krishna devotees in India. From analyses of performances and conversations with performers, audience, and local scholars, Mason argues that râs lila actors and audience alike actively assume roles that locate them together in the spiritual reality that the play represents. Correlating Krishna devotion and theories of religious experience, this book suggests that the emotional experience of theatrical fiction may arise from the propensity of audiences to play out roles of their own through which they share a performance's reality.

"No one who reads this book will ever hear the phrase child's play in the same way again. In analyzing the famous râs lilas of Vrindavan, Mason asks the big questions about where our species-wide theatricality comes from and what it has to do with another general human attribute - religion. In India, this is time-honored theoretical turf, but Mason approaches it in an entirely fresh way. The results are fascinating, and the writing is unusually lucid and energetic." - John Stratton Hawley, Professor of Religion, Barnard College

"David Mason approaches the performances of the râs lilas - the much-studied dance dramas of Krishna devotees - with the fresh eyes of a scholar of theatre art. He questions how these performances attract the fervent attention of audiences who see beyond the often ramshackle productions to a vision of divinity. He finds his answers in the preparation of both actors and audiences who participate in the ongoing drama of life in Vrindaban, where Krishna s eternal play coexists with daily mundane life. He makes his argument by drawing parallels with the acceptance by Western audiences of the alternative reality created by staged productions, and this insightful study sheds light on both religious and theatrical processes." - Margaret H. Case, author of Seeing Krishna: The Religious World of a Brahman Family in Vrindaban