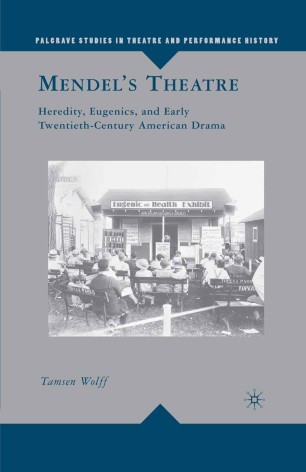 Mendel's Theatre offers a new way of thinking about early twentieth-century American drama by uncovering the rich convergence of heredity theory, the American eugenics movement, and innovative modern drama from the 1890s to 1930.

"Learned, insightful, and engaging, Mendel's Theatre is an impressive and groundbreaking study. Its critical voice is assured, and it establishes a new way of thinking about the relationships among drama, theatre, and social theory during the early twentieth century." - Theatre Survey

"While much has been made of American theatre's (and modern theatre's in general) obsession with heredity, little exists on eugenics itself, much less anything so thoroughly presented and articulated. The term Mendel's Theatre will likely turn into a much-used phrase when twentieth-century drama is discussed, inescapable as it will be to ignore what is here presented in the future." - William W. Demastes, Professor of English, Louisiana State University, Baton Rouge

"Mendel's Theatre transcends the disciplinary boundaries of theatre scholarship to also explore the history of science, social movements, and philosophy. Wolff s ambitious and meticulously researched book offers both a broad view of eugenics evolution in the United States, and pointed analyses of canonical American plays that deal implicitly or explicitly with the issues and concerns of eugenics." - Broadside