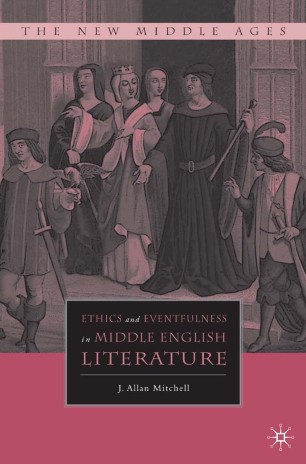 Medieval writers were fascinated by fortune and misfortune, yet the critical problems raised by such explorations have not been adequately theorized. Allan Mitchell invites us to consider these contingencies in relation to an "ethics of the event." His book examines how Middle English writers including Chaucer, Gower, Lydgate, and Malory treat unpredictable events such as sexual attraction, political disaster, social competition, traumatic accidents, and the textual condition itself - locating in fortune the very potentiality of ethical life. While earlier scholarship has detailed the iconography of Lady Fortune, this book alters and advances the conversation so that we see fortune less as a negative exemplum than as a positive sign of radical phenomena.

J. ALLAN MITCHELL is Assistant Professor of English at the University of Victoria, Canada.

"Ethics and Eventfulness is a bold and learned attempt to rethink the influence of Boethius s Consolation of Philosophy on the English Middle Ages by re-positioning medieval thinking about Lady Fortune in terms appropriate to current philosophical and rhetorical discourses. Mitchell s analysis demonstrates both breadth and intimacy with medieval texts and their intellectual contexts, as he deals with Chaucer, Gower, Usk, Lydgate, Malory, and the little-known Chaunce of the Dyse. His fine grasp of contemporary thought allows him to ptopose some surprising congruences with more current idioms, including theories of eventfulness and moral luck. All of this is presented in a lucid and engaging style." - Peggy A. Knapp, Professor of English at , Carnegie Mellon University

"J. Allan Mitchell aims to disrupt our usual understanding of ethics in late-medieval English literature. He links medieval and modern traditions of moral philosophy to recover a significant place for particularity, fortune, and contingency. Through this lens he offers new and challenging readings of agency and events in Chaucer, Gower, Lydgate, and Malory. . . . His book shows not just the moral universe of medieval writers but what remains unresolved and irreducible within it." - Robert R. Edwards, Professor of English and Comparative Literature, Pennsylvania State University

"Mitchell performs a series of brilliant analyses, informed by modern theory, across a range of medieval literary texts both well known and less familiar. In the process he develops a radical case for rehabilitating fortune as a force to be reckoned with: a positive concept that articulates ethical problems arising from the contingent, the temporal, and the event. This book is essential reading on the topic of fortune in the Mmiddle Aages." - Peter Brown, Professor of English, University of Kent