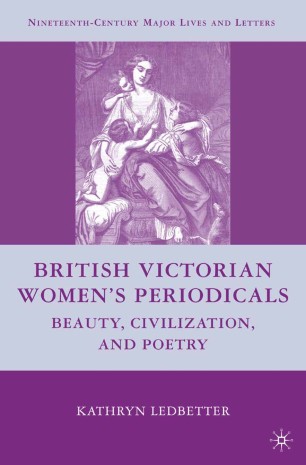 Ledbetter explores themes and patterns of poetry publication in a variety of women's periodicals published throughout the Victorian era using taste, style and the significance of poetry to advance our understanding of women's lives in the nineteenth century.

"Kathryn Ledbetter s scholarship in British Victorian Women s Periodicals is thorough and comprehensive, made more compelling by the clear style and measured tone of her writing: the book creates a momentum better experienced from beginning to end than in separate chapters. Her achievement is in reconstituting Victorian women s periodicals for contemporary scholars, reclaiming them not only for intellectual scrutiny but for intellectual pleasure as well." - Wordsworth Circle

"Wide-ranging and rich in implication, British Victorian Women's Periodicals contributes to publishing history, women's studies, and cultural studies. What Ledbetter provides is in part a documentary history of women's lives and reading practices and in part a materialist literary history that presents the poetic careers of Elizabeth Barrett Browning, Grace Aguilar, and a host of other women poets in a new light. She makes a spirited case that women's periodicals formed a site of power rather than mere indoctrination for its women readers, and that latter-day scholars must approach this popular literature on its own terms." - Linda K. Hughes, Addie Levy Professor of Literature, Texas Christian University

"Ledbetter sees poetry and women's magazines as creating a center of power for women, particularly in the religious civilizing role that the Victorian domestic ideology prescribed for them . . . A valuable resource for students of 19th-century British literature, culture, and history. Summing Up: Recommended." - Choice