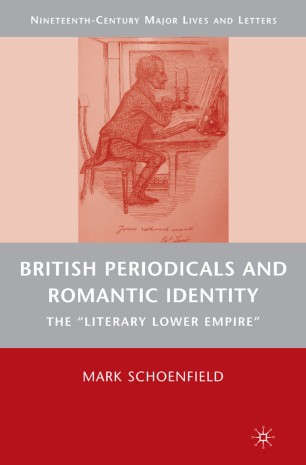 When Lord Byron identified the periodical industry as the "Literary Lower Empire," he registered the cultural clout that periodicals had accumulated by positioning themselves as both the predominant purveyors of scientific, economic, and social information and the arbiters of literary and artistic taste. British Periodicals and Romantic Identity explores how periodicals such as the Edinburgh, Blackwood s, and the Westminster became the repositories and creators of "public opinion." In addition, Schoenfield examines how particular figures, both inside and outside the editorial apparatus of the reviews and magazines, negotiated this public and rapidly professionalized space. Ranging from Lord Byron, whose self-identification as lord and poet anticipated his public image in the periodicals, to William Hazlitt, equally journalist and subject of the reviews, this engaging study explores both canonical figures and canon makers in the periodicals and positions them as a centralizing force in the consolidation of Romantic print culture.

MARK SCHOENFIELD is Associate Professor of English at Vanderbilt University and the author of The Professional Wordsworth: Law, Labor, and the Poet's Contract. He is the former president of Interdisciplinary Nineteenth-Century Studies and has published articles in The Wordsworth Circle, Studies in Romanticism, and various other journals.

"Schoenfield thrillingly immerses us in the realm of romantic era periodicals, and reveals how they ushered in new forms of personal identity. This masterful study should be required reading for anyone interested in the intersection of politics and literature. The book as a whole stands as a model of impressively erudite but also totally engaging scholarship. I especially admired Schoenfield s bravura in reading Byron s embattled relationship with the reviewers." - Judith Pascoe, Professor of English, University of Iowa and author of The Hummingbird Cabinet: A Rare and Curious History of Romantic Collectors

"British Romanticism invented the modern media - the literary lower empire of magazines and reviews explored in Schoenfield s new book. In a series of supple, vivid case studies, Schoenfield tracks the forging of literary identity in the Romantic culture wars. He shows us a noisier, funnier, bloodier Romanticism than we have been used to, and it will never look the same again." - Ian Duncan, Department of English, University of California, Berkeley

"British Periodicals and Romantic Identity offers an impressively wide-ranging and compellingly detailed analysis of how a complex interplay of print voices at once shaped and resisted Romantic notions of selfhood." - Kim Wheatley, Associate Professor, English Department, College of William and Mary