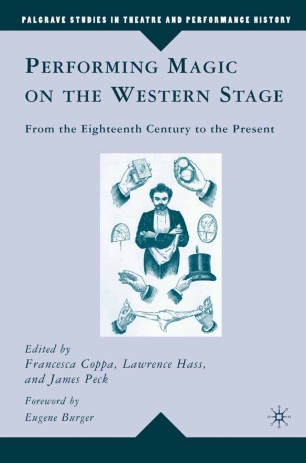 Performing Magic on the Western Stage

From the Eighteenth Century to the Present

Performing Magic on the Western Stage examines magic as a performing art and as a meaningful social practice, linking magic to cultural arenas such as religion, finance, gender, and nationality and profiling magicians from Robert-Houdin to Pen& Teller.

"The product of intense preparation by scholars and teachers trained in theatre, film, media, dance, philosophy, anthropology, literature, religion, psychiatry and, of course, magic itself, Performing Magic on the Western Stage skillfully conjures the interdisciplinary powers of performance studies to achieve an apparently impossible feat: an edited collection in which every contribution is equally strong and equally necessary." - Joseph Roach, Sterling Professor of Theater, Yale University

"Performing Magic on the Western Stage offers a much-needed and carefully compiled anthology of essays addressing some of the most important questions that have emerged out of the recent explosion of academic interest in staged magic. Drawing on work from a wide variety of fields, including Theater and Performance Studies, Gender and Sexuality Studies, Cinema and Media Studies, Philosophy, and Anthropology, the essays collected here examine how staged magic shapes and exposes our relation to: otherness; class mobility; gender, sexuality, nationality and ethnicity; secrecy; disability; community; entertainment; ritual and religion; capitalism and money; self-deception; and the figure of the magician. This volume takes magic seriously as a meaningful art form, and explores its changing significance in specific historical and geographical locations. The collection brings together a wealth of original archival and field research, and initiates a series of interdisciplinary conversations that need to be continued. We learn, among other things, of the continued importance of the magician in film history long after the heyday of "the cinema of attractions"; of how contemporary bad-boy magicians like Penn and Teller pave the way for alternative relations among the magician, the assistant and the audience; of the relationship between William Robinson s yellow-faced performances of Ching Ling Soo and Chinese magician Chee Ling Qua (a.k.a. Ching Ling Foo); and of the range of magicians - including transgressive tricksters, retro-sexists, escape artists and clairvoyants - who provoke audiences to widen their eyes in wonder or roll them tiredly, as though the time of magic had passed. Yet as Coppa, Hass and Peck make clear, magic s time has only just begun." - Karen Beckman, Jaffe Associate Professor of the History of Art at the University of Pennsylvania and author of Vanishing Women: Magic, Film and Feminism"The volume evidences a running tension between conflicting definitions: magic as illusion or deception versus magic as occult phenomenon or alternative religion . . . a useful and informative collection." - Choice