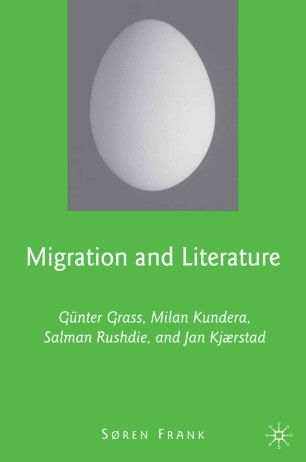 Migration and Literature offers a thought-provoking analysis of the thematic and formal role of migration in four contemporary and canonized novelists.

"Frank s study presents a rigorously constructed new paradigm for understanding the multiply centered experiences of migration and displacement. The literary expression of modern exilic experience emerges from a spatially and culturally complex map and calls for a redefinition of such categories as migrant and exile literature. Theoretically well-grounded, historically informed, and written in a clear and fluid style, Migration and Literature refines and redefines the parameters of exilic writing by shifting the focus from authorial biography to the concept of literature of migration, as marked by our social and textual experience of modernity rooted in migratory sensibilities. The book is an outstanding contribution to the growing body of critical work on transnational literatures." - Azade Seyhan, Fairbank Professor in the Humanities and Professor of German and Comparative Literature, Bryn Mawr College and author of Writing Outside the Nation

"In this important contribution to the contemporary debate on the novel, Frank argues that the postcolonial theme of migration in an increasingly changing world is also profoundly relevant for the late twentieth-century European novel. The book blends insightful analyses of works by Günter Grass, Milan Kundera, Salman Rushdie, and Jan Kjærstad with a superb discussion of narrative theories from Hegel to Franco Moretti." - Thomas Pavel, Professor in Romance Languages and Literatures, University of Chicago and author of La pensée du roman

"Thanks to Frank s book, the concept of homelessness has now morphed from a trope of self-indulgent intellectual masochism into an angle describing a basic epistemological condition and the dominant form of the novel in the early twenty-first century." - Hans Ulrich Gumbrecht, Albert Guérard Professor in Literature, Stanford University and author of Production of Presence

"While at first glance the comparison of the four chosen authors seems a daring project, Frank conceptualises his Ansatzpunkt well and manages to broaden the scope of migration on both the formal and thematic levels . . . Frank s approach of incorporating biographical information in the interpretation of the literature where appropriate works well with the novelists chosen. In including an author who does not have a personal migratory background, Frank convincingly argues for expanding the literary designation of migrant literature to migration literature and thus draws attention to the ongoing social processes which find their way into the aesthetics of a 'migration literature'." - Kult Online