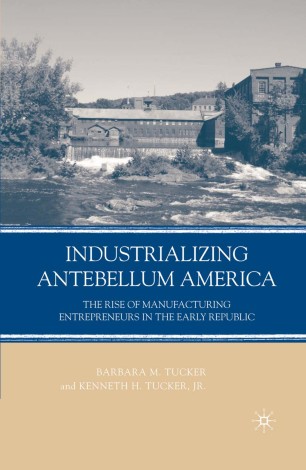 The Rise of Manufacturing Entrepreneurs in the Early Republic

This book explores the rise of manufacturing through the beliefs and practices of key industrialists and their families, exploring how they represented the diverse possibilities for the organization of a new industrial society.

"In this book the Tuckers tap into a rich vein of antebellum history, ingeniously fashioning a kind of group history of three entrepreneurial families and the hyper-successful sons they produced. The Slater boys, Samuel Colt, and Amos Adams Lawrence might have been rational economic actors, say the Tuckers, but that's only one dimension of the their ascent to the heights of early American capitalism. Business historians will be much interested in this deeply researched book and the 'cultural turn' it brings to their field." - David Brody, professor emeritus of history at UC-Davis and author of Labor Embattled: History, Power, Rights (2005)"Years ago cultural historians took the so-called 'linguistic turn' and began acknowledging the languages and values reflected in their primary sources. This new study by the Tuckers serves up an example of the riches to be gained by applying such sensitive interpretive devices to the production of economic history.Here characters as diverse as the reckless charlatan 'Dr. Samuel Coult,' the obsessively pious John Fox Slater, and the sanctimonious Amos A. Lawrence parade their idiosyncrasies for all to see while pursuing a common goal - success in manufacturing. Constructed largely from 'old-fashioned' manuscript sources, this study adds a large measure of proof to the recent speculative musings of historians about the complicated rise of American capitalism." - John Lauritz Larson, Purdue University"What the Tuckers bring to this well-established theme is an accessible account of New England entrepreneurship that places families, not individuals, at the center. For that reason, historians from both the business/economic and social/cultural side of the discipline will find this brief volume an entertaining and useful read." - Sean Patrick Adams, American Historical Review