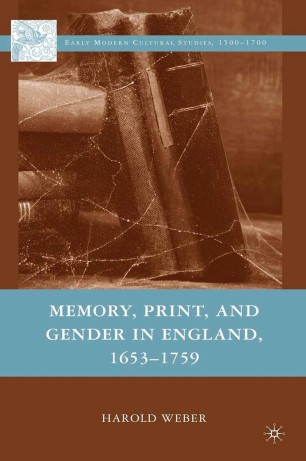 This book surveys the genesis of the modern conception of memory where gender becomes crucial to the processes of memorialization and suggests ways in which technology opens a new chapter in the history of memory.

"Weber has written a deeply absorbing account of the cultural construction of memory. Memory, Print, and Gender in England, 1653-1759 is a major reconsideration of a moment when the cumulative weight of print forged a new, exciting, and disturbing notion of fame. This study will be riveting and essential reading for scholars of the seventeenth- and eighteenth-centuries. Weber's brilliant and beautifully argued readings explore the work of Cavendish, Milton, Pope and Richardson as they negotiated classical notions of fame in a world of proliferating paper and competing versions of history. The book ends with a moving meditation on the technological revolution we are now living through, exploring the shape of memory in its shifting and borderless archive." - Ann Baynes Coiro, Rutgers University

"In this deceptively elegant book, Weber traces the complex relations among printing, writing, reading, cultural memory, and official history roughly in the middle of the seventeenth-century. The book begins with four historically focused chapters on individual authors and concludes with a powerful essay on the morality of memory in a post-modernist era, operating in the baleful shadow of the holocaust after which the possibilities of a public and coherent form of memory seemed all but exhausted. Each of Weber s historical cases reveals a distinct set of attitudes to how the author, by writing, can secure her or his place in the annals of fame, and, over time, how the proliferation of books, and of other written and printed media, forced individual authors into an increasingly elliptical relation to what they most wished to secure for themselves. Highly recommended." - Richard Kroll, author of The Material Word: Literate Culture in the Restoration and Early Eighteenth Century and Restoration Drama and "The Circle of Commerce": Tragicomedy, Politics, and Trade in the Seventeenth Century

"Weber's writing is lucid and accessible, and his notes, bibliography, and index are thorough... Recommended." - CHOICE