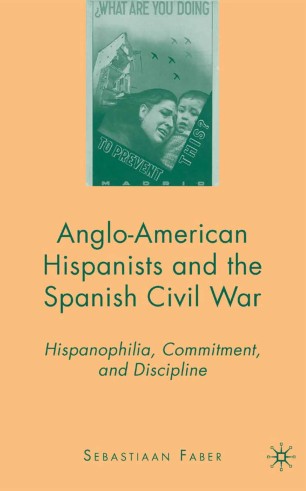 In this book, Faber assesses the long-term impact of the Spanish Civil War on Hispanic Studies as an academic field in the United States and Great Britain. Combining institutional history with biography, the book gives a compelling account of the dilemmas that the war posed for four Hispanists who turned their love of Spain into their life's work.

Sebastiaan Faber is an Associate Professor of Hispanic Studies at Oberlin College.

"From what may seem like unpromising material, Sebastiaan Faber has produced an utterly fascinating study. Elegantly and perceptively written, this thoroughly researched book illuminates brilliantly the political labyrinth which many American scholars had to navigate in the 1930s and 1950s and, indeed, still do today. At the same time, it goes a long way to explaining why Spain and particularly its civil war engaged and continues to engage the passions of Anglo-Saxon writers." - Paul Preston author of We Saw Spain Die: Foreign Correspondents in the Spanish Civil War"Affect, ideology, and the canons of academic rigor: in this insightful and wide-ranging study, Faber explores how these three sets of forces - often at odds with each other - shape the work of British and American scholars of Spain. Focusing on the participant/observer tension that frequently haunts the work of scholars who are called upon to interpret and judge contemporary events (such as the Spanish Civil War and the Franco dictatorship), Faber sheds a fascinating new light on the history and current state of Hispanic Studies in the United States and Great Britain, and, more broadly, the constitutive tensions at the core of any scholarly enterprise." - James D. Fernández, Associate Professor and Founding Director, King Juan Carlos I of Spain Center of NYU