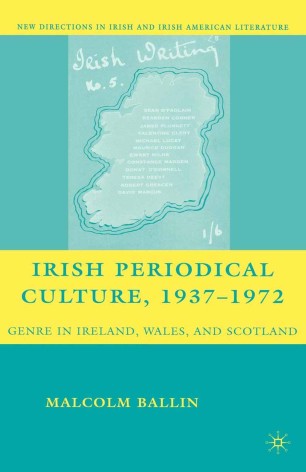 Genre in Ireland, Wales, and Scotland

This book examines periodical production in the context of post-revolutionary Ireland, employing the unique lens of genre theory in detailed comparisons between Irish, English, Welsh, and Scottish magazines.

"In using genre both as a typological and topological marker for the production of periodicals in Ireland, Wales, and Scotland over a period spanning the whole of the twentieth-century, Ballin convincingly charts the rich, diverse, and only partly explored territory of periodical production. By inventorying and offering in-depth descriptions of the periodicals in their historical, social, cultural, and literary context, Ballin also paves the way for further detailed exploration of individual reviews, miscellanies, and little magazines. His pioneering scholarly account, together with the abundant bibliography he provides, will prove an invaluable resource for students, academics, and anyone else interested in this developing field of research." - Maryvonne Boisseau, Institut du Monde Anglophone, Paris Sorbonne Nouvelle

"Rigorously researched, comprehensive in scope, scholarly yet accessible, Irish Periodical Culture 1937-1972 represents a highly significant contribution both to the field of Irish Studies and to research into genre. Ballin s judicious analysis of the aspirations and preoccupations of editors, contributors, and their audiences, and meticulous examination of the publication scene and process cast considerable light on Irish cultural history at key junctures in the twentieth-century. The book is not merely illuminatingin what it has to say about the Irish Republic and Northern Ireland; it is enriched by Ballin s alertness to what is distinctive in Northern and southern Irish, Welsh, and Scottish cultures and to the dialogue between them." - Michael Parker, University of Central Lancashire