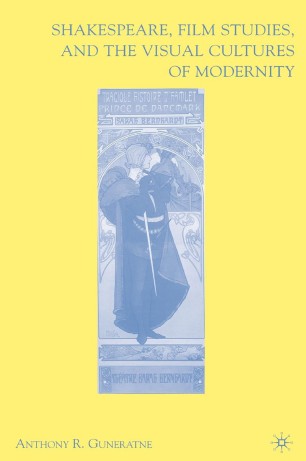 Shakespeare, Film Studies, and the Visual Cultures of Modernity

This book is the first in-depth cultural history of cinema's polyvalent and often contradictory appropriations of Shakespearean drama and performance traditions. The author argues that these adapatations have helped shape multiple aspects of film, from cinematic style to genre and narrative construction.

"Shakespeare, Film Studies, and the Visual Cultures of Modernity is a remarkable book, one that exhibits both a sensitivity to Shakespeare's texts and a wide knowledge of international cinema. Theoretically sophisticated but never obscure, written in a flowing, attractive prose, Guneratne's study expands beyond any previous approach to Shakespeare on film to become a complex meditation on the cinema itself." - Michael Anderegg, Chester Fritz Distinguished Professor of English Emeritus and author of Cinematic Shakespeare and Orson Welles, Shakespeare, and Popular Culture

"Shakespeare, FilmStudies, and the Visual Cultures of Modernity is provocative and original,proposing what amounts to a history of cinema seen through the lens of Shakespeare film.Guneratne writes with deep learning across several media histories and disciplines and makes illuminating connections no one else has thought of making. His is one of the most interesting voices to come out of the wave of new work on Shakespeare films." - Peter S. Donaldson, Professor of Literature, Massachusetts Institute of Technology and author of Shakespearean Films/Shakespearean Directors

"The strength of the volume lies in Guneratne s admirable skill in amassing a profusion of details about these products, cultures, times, locations, conventions, and traditions; only a scholar with a deft hand and archival fortitude could weave together accounts of hundreds of Shakespeare productions into anything resembling a coherent narrative. Indeed, the word that most often came to mind when reading this book was 'encyclopedic.' " - Renaissance Quarterly