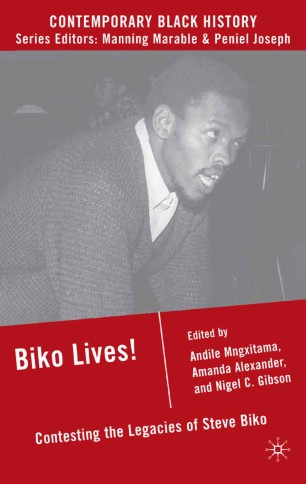 Contesting the Legacies of Steve Biko

This collection looks at the on-going significance of Black Consciousness, situating it in a global frame, examining the legacy of Steve Biko, the current state of post-apartheid South African politics, and the culture and history of the anti-apartheid movements.

ANDILE MNGXITAMA is a PhD student at the University of Witwatersrand, South Africa.

AMANDA ALEXANDER is a PhD student in African history at Columbia University and a Visiting Researcher at the Centre for Civil Society, University of KwaZulu-Natal, South Africa.

NIGEL C. GIBSON is director of the Honors Program at Emerson College, USA.

"This welcome collection of essays about Biko's existentialism, self-consciousness, place of phenomenology in his philosophy, and contribution to the dialectics of liberation, as well as the meaning of race and class problematic in Biko's work, African culture and humanism in his thinking, attitude toward the rights and roles of women, and much more examines his legacy and the meaning that his preachings, writings, and life's example gave to the development of black consciousness in South Africa. But, by far, the most important chapters in the book are Gail Gerhart's hitherto unpublished 1972 interview with Biko and Neville Alexander's recollection of Biko and the Azanian Manifesto." - R. I. Rotberg, Choice"Taken as a whole, this collection of essays is an important addition to the scholarship on Steve Biko. It contributes not only to a deeper understanding of what philosophy is, but also how Biko's writing can be considered philosophical." - Martin Murray, Professor of Sociology, SUNY Binghamton"I never thought I would read anything like this that reminded me of the 'good old days' when we were giddy with hopes and enthusiasm for recreating our own world! Biko Lives! will ruffle many feathers. People who have been trying to 'program' the forward movement of history and human development are going to have to think again."