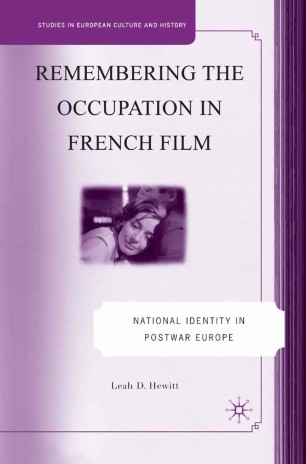 Remembering the Occupation in French Film

When collective memory is a source of national debate, the public representation of history quickly becomes a locus of controversy and ideological struggle. This work shows how French film has allowed for a public airing of current concerns through the lens of memory's recreations of the Occupation.

"This work offers a sweeping, incisive analysis of the problematic ways French national identity in the postwar identity has been portrayed in feature films that dramatize the occupation in WWII. It covers a stunning array of works over six decades and affords a an extraordinarily perceptive cultural and historical examination of the relationships between cinematic representation and a national identity crisis rooted in unresolved conflicts about the meaning of occupation." - Richard J. Golsan, Professor of French and Department Head, Texas A&M University"In this era in which moving images reign, this far-reaching and crystal-clear study of post-war film on the Occupation is most timely. Remembering the Occupation addresses the way societies remember what has shaken them; it will surely become a new must-read among the ever-growing body of work that investigates the relationship between memory and history." - Martine Guyot-Bender, author of Mémoire en dérive

"Hewitt masterfully tracks the important concept of individual and collective guilt and national responsibility in French films. This significant volume convinces by its originality as it offers new perspectives on a rich and ongoing scholarly discourse over France s unsavory past. For every scholar of French and Francophone studies, for specialists in film, gender and European history, but also for the learned people curious to read a compelling argument on how the Occupation is still alive in French culture today, this book is invaluable." - Eliane DalMolin, Professor of French, Chair, French and Francophone Studies, and Editor, "Contemporary French & Francophone Studies, University of Connecticut

"In an era of profound malaise about how history can be understood, Leah Hewitt offers a rich and suggestive exploration of postwar films that 'remember' the Occupation. Her study is one of the first to make an explicit link between women's roles in the war and France's self-definition in the post-war era. Hewitt's case becomes all the more fascinating when one recalls that movie stars such as Brigitte Bardot, Catherine Deneuve and Isabelle Adjani have embodied both Marianne (traditional symbol of the French Republic) and ambiguous heroines in films about the Occupation." - Lynn A. Higgins, Dartmouth College