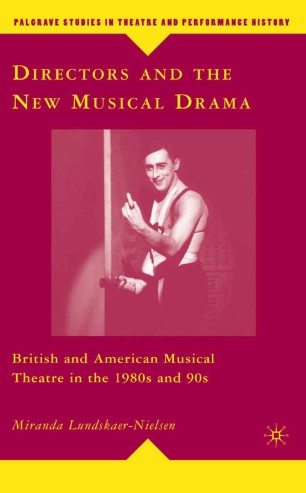 British and American Musical Theatre in the 1980s and 90s

This is one of the first books to offer a rigorous analysis of the enormous changes in the musical theatre during the 1980s and 90s.  In addition, it focuses on the contribution of well-known, serious theatre directors to the mainstream Musical Theatre and it is the first book to offer a dual Anglo-American perspective on this subject.

Miranda Lundskaer-Nielsen is a founding producer of the New York Musical Theatre Festival and a Senior Lecturer in Drama at Bath Spa University, England.

"Lundskaer-Nielsen has provided a lucid, informed, and (thankfully) non-partisan look at the British Invasion , which will do much to provide a new and much-desired context to this phenomenon. Her examination of the roots of the megamusical and its tremendous effect on both sides of the Atlantic will be fascinating to anyone interested in popular culture, the craft of the director, Anglo-American relations - let alone, of course, the commercial and artistic vagaries of the musical theater." - Laurence Maslon, Associate Arts Professor, New York University, co-author (with Michael Kantor) of Broadway: The American Musical, and author of The Sound of Music Companion

"I was impressed with the scope of Lundskaer-Nielsen's study, the range and depth of her knowledge about theatre and musical theatre, and the connections she is able to make among disparate works and influences. Her premise that the directors of 'musical dramas' have been relatively ignored, while the choreographer-directors have been accorded a central place in the historical narrative of musical theatre is sound and meticulously developed. Her analyses are cogent, her conclusions perceptive and valid." - Barbara Wallace Grossman, Chair, Department of Drama and Dance, Tufts University

"As the first book to concentrate on the director s contribution to the collaborative creation of the modern musical, this volume presents a wise and balanced approach to developments in Anglo-American musical theatre over the last three decades. Unlike the many opinionated and emotive accounts of the decline of the Broadway musical and the corresponding rise of the so-called megamusical in the 1980s, it constitutes a rare example in the field of a book that is both accessible to the average reader while offering a sophisticated and carefully researched re-appraisal of the recent history and aesthetics of the genre." - Robert Gordon, Professor of Drama, Goldsmiths College, University of London