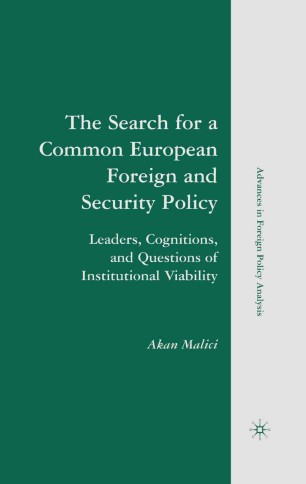 The Search for a Common European Foreign and Security Policy

When Kissinger lamented, 'When I want to call Europe, I cannot find a phone number', the implication was clear. Since then, the  momentum of the EU towards a common foreign and security policy has increased. Yet, the viability of this institutionalization effort is questionable. This book advances a new perspective on this paradox.

"This book has the potential to dramatically revise the way international institutions are studied in the fields of foreign policy and international relations. Rather than fall into the endogeneity trap posed by examining structural features of institutions as causes of institutional viability, Malici develops a cognitive theory that locates causality in the agents that constitute institutions. This theory is explored through at-a-distance techniques used to analyze leaders psychological characteristics so that we can uncover their preferences when confronted with real world decision problems. Why do European ambitions toward a common foreign and security policy sometimes fail and sometimes succeed? The novel answer provided by this book is that the preferences of leaders matter, as the insightful case studies of British, French and German leaders dealing with Kosovo, Afghanistan and Iraq clearly demonstrate. More importantly, the approach developed in this book could fruitfully be applied to many cases requiring intergovernmental institutional cooperation, including the current nuclear crises with Iran and North Korea. This is an important and timely contribution to the study of international affairs." - Cameron G. Thies, University of Missouri-Columbia

"Akan Malici is a major young scholar in political psychology today because of his excellent application of modern methods to broader subjects in the discipline of political science. Here he argues that the psychology of European leaders plays a crucial role in institutional development in the European Union. Two things stand out about the book: (1) the smart theoretical premise that institutional viability requires some level of cognitive compatibility among the actors involved; and (2) the rich empirical investigation that looks at the role of actors' cognitions across three fascinating case studies. This is an important and timely work." - Mark Schafer, Louisiana State University

"This book makes a convincing theoretical and empirical case for the importance of beliefs and leadership in the foreign and security policies of the European Union. Using some of the latest methods of content analysis to identify the beliefs of British, French, and German leaders during foreign policy crises over Kosovo, Afghanistan, and Iraq, Malici analyzes the degree and type of compatibility among their respective belief systems. He is able to measure systematically internal cognitive consensus within each state plus their convergence and divergence across states, which the author argues determines the institutional viability of the EU s security regime for dealing with external threats. The implications of the analysis extend beyond the EU s operation to challenge theoretical assumptions about the importance of agents in systemic theories of international relations and foreign policy analysis." - Stephen G. Walker, Professor Emeritus, Arizona State University