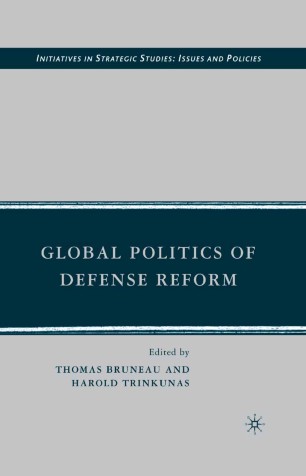 Part of the Initiatives in Strategic Studies: Issues and Policies book series (ISSIP)

This volume highlights the impact of global trends on defense reform and civil-military relations, including phenomena such as globalization and economic liberalization that are not usually associated with such matters.

Thomas Bruneau is a Distinguished Professor of National Security Affairs  in the Naval Postgraduate School's Department of National Security Affairs. He received his Ph.D. in Political Science from the University of California at Berkeley. He has researched and written extensively on Latin America, especially Brazil, and Portugal. Dr. Bruneau has published more than a dozen books in English and Portuguese as well as articles in scholarly journals. His most recent books include Soldiers and Statesmen: The Institutional Bases of Democratic Civilian Control (Austin: University of Texas Press, 2006) with Scott Tollefson, and Reforming Intelligence: Obstacles to Democratic Control and Effectiveness (Austin: University of Texas Press, 2007).
Harold Trinkunas is an Associate Professor in the Department of National Security Affairs at the Naval Postgraduate School. He received his Ph.D. in Political Science from Stanford University. His research and writing has focused on Latin American politics, particularly democratization and civil-military relations. His recent publications include Crafting Civilian Control of the Military in Venezuela (University of North Carolina Press, 2005); and Terrorism Financing and State Responses: a Comparative Perspective (Stanford University Press, 2007), co-edited with Jeanne Giraldo. Professor Trinkunas also serves as Deputy Director for Academic Affairs for the Center for Civil Military Relations at the Naval Postgraduate School.