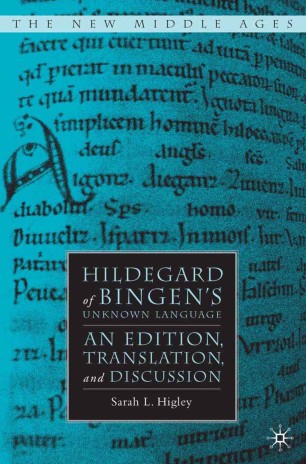 An Edition, Translation, and Discussion

The Lingua Ignota, "brought forth" by the twelfth-century German nun Hildegard of Bingen, provides 1012 neologisms for praise of Church and new expression of the things of her world. Noting her visionary metaphors, her music, and various medieval linguistic philosophies, Higley examines how the "Unknown Language" makes arid signifiers green again. This text, however, is too often seen in too narrow a context: glossolalia, angelic language, secret code. Higley provides an edition and English translation of its glosses in the Riesencodex (with assistance from the Berlin MS) , but also places it within a history of imaginary language making from medieval times to the most contemporary projects in efforts to uncover this woman s bold involvement in an intellectual and creative endeavor that spans centuries.

SARAH HIGLEY is an Associate Professor at the University of Rochester, New York, USA.

"For the first time, Hildegard's Lingua ignota is put in a strictly historical context, which runs up to the present time. The content of the 1012 words of the Lingua ignota is based on the 'Summarium Heinrici', a medieval encyclopedia, which stands in the tradition of the Etymologies of Isidor of Sevilla. In this work, all the visible and non-visible reality is described and brought into a hierarchical order. The tendency is 'reification', describing realities, not transcendence, mythical speech or quietness. With great accuracy and theoretical positioning, Higley's book makes a strong contribution to the study of Hildegaard and language creation." - Michael Embach, Professor at the University of Trier and Director of the City Library of Trier; Author of Die Schriften Hildegards von Bingen (2003)

"Hildegard s Unknown Language of more than one thousand invented words has both intrigued and puzzled modern scholars since the mid-nineteenth century. Higley s book provides by far the best edition of this language along with its Latin and German glosses, as well as a complete annotated English translation. Setting it within the context of invented languages, past and present, Higley corrects numerous misconceptions about Hildegard s most mysterious creation and draws fascinating parallels to today s invented languages, especially those by women. This is a unique achievement and a must-have book for anyone interested in Hildegard." - Honey Meconi, Professor of Musicology, Eastman School of Music; Author of Hildegard of Bingen (forthcoming)