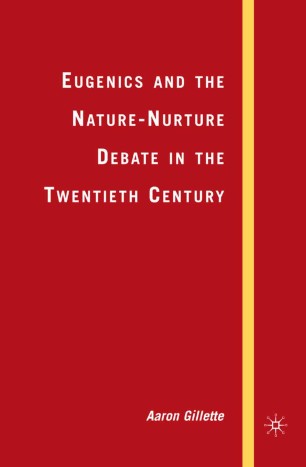 Eugenics and the Nature-Nurture Debate in the Twentieth Century

Gillette shows that the sciences of sociobiology and evolutionary psychology were undergoing rapid development in the early Twentieth century. However, many of the early researchers in these sciences were also eugenicists. With the rise of behaviourism and the reaction against eugenics in the 1930s, any scientific claims that behaviour might be influenced by heredity were suppressed for ideological reasons.

"Gillette covers a development in intellectual history that, I believe, was formative in generating today's conventional wisdom about human nature, yet has scarcely been treated by historians of science. The book is well written and researched, and brings interesting new facts to light."

- Steven Pinker, Johnstone Family Professor of Psychology, Harvard, and author of The Stuff of Thought

"In this book, Gillette conclusively demonstrates that the sociobiological revolution of the late 20th century was not nearly as revolutionary as most think. Anticipating the work of E. O. Wilson, Richard Dawkins, Robert Trivers, and others by half a century, the work of early 20th-century evolutionary psychologists nevertheless fell into obscurity for several reasons, not the least of which was its taint by association with the eugenics movement. This is a volume that will be of great use not just to students of the histories of psychology and eugenics, but also to those interested in the philosophy and sociology of science." - Kevin Kern, University of Akron