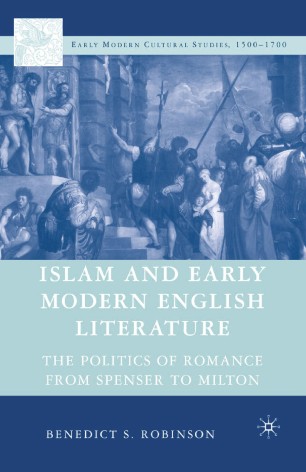 The Politics of Romance from Spenser to Milton

This book traces the process through which authors like Spenser, Shakespeare, and Milton adapted, rewrote, or resisted romance, mapping a world in which new cross-cultural contacts and religious conflicts demanded a rethinking of some of the most fundamental terms of early modern identity.

BENEDICT ROBINSON is Assistant Professor of English at the State University of New York at Stony Brook, USA.

"This is a masterful study, as historically learned and theoretically sophisticated as it is beautifully written." - Jonathan Gil Harris, Professor of English, The George Washington University

"With its sharply original reinvestigation of the uses of romance in sixteenth and seventeenth-century literature, Robinson's book is an important addition to the growing body of work on early modern representations of the Islamic world. Offering fresh perspectives on a number of key texts, from The Faerie Queen to Othello, The Tempest, and Paradise Lost, whilst ranging adventurously through a variety of less familiar material from writers as diverse as Munday, Greville, and Massinger, it should become required reading for anyone interested in the invention of the 'Orient. " - Michael Neill, Professor of English, University of Auckland

"An incisive and beautifully written account of the intersections between literary form and history in the early modern period. Arguing that romance constantly reimagines and is itself reshaped by cross-cultural encounters, Robinson shows how it inhabits a space that is at once transnational and at the heart of national identity. This book provides an original andcompelling postcolonial perspective on early modern literature and culture."