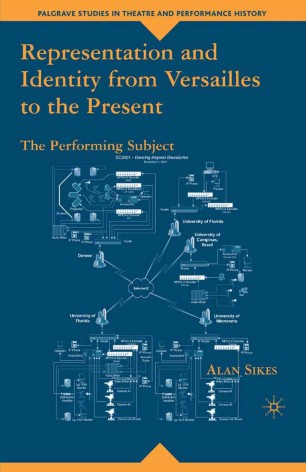 Representation and Identity from Versailles to the Present

Sikes traces the shifting role of performance in the fashioning of subjectivity from the Modern to the Postmodern eras. The book joins history and historiography and is grounded in a body of research about varied performance subjects from court dance, ballet, opera, festivals, celebrations, propaganda films, Hollywood movies to reality TV.

ALAN SIKES is Assistant Professor of Theatre at Hunter College at the City University of New York, USA.

"At the time when the prefix 'post ' begins to lose its singularity and radical sharpness, Sikes's study reminds us that we have much to gain by exploring the tension between past and present imaginations. His critical imaginary travels through an insightful analysis of the relationship between social status and performance (conduct manuals from the time of Louis XIV), instability within sexual hierarchies of the Baroque culture, post-revolutionary freedom and new modes of political participation (1789), the culture of visuality in the nineteenth century (Zola and Freud), mediated images (The Truman Show), and same-sex marriage (2007, USA). What is significant in the study of these historical fragments is Sikes's commitment to exploring performative articulations and re-articulations, which view the horizon of the intelligible not as limit of a historiographic project, but as a dynamic site where the radical performative possibilities can exist. By so doing, this study may effect how we write about theatre/performance history." - Michal Kobialka, Professor of Theatre, University of Minnesota