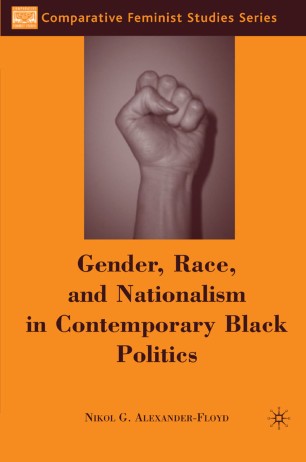 An examination of the interrelationship between gender, race, narrative, and nationalism in black politics specifically within American politics as a whole. The author not only highlights the critical role of race and gender, she goes further to show how they operate to define political discourse and to determine public policy.

“In Gender, Race, and Nationalism, Nikol G. Alexander-Floyd makes a timely and necessary contribution to the study of Black politics by highlighting the ways in which our efforts to combat racial inequality are simultaneously supporting conservative White nationalist notions of Black pathology vis a vis our gender relations.” (Kiana Cox, National Political Science Review, Vol. 17 (1), November, 2015)

"Gender, Race, and Nationalism in Contemporary Black Politics is a welcome addition to a growing body of scholarship by a cohort of second generation Black feminist political scientists...Alexander-Floyd reveals not only the significance of the cultural dimensions of politics, but also how conventional social science paradigms often obscure rather than clarify. In addition to an interdisciplinary mix of feminist analysis, cultural studies, and policy analysis, her work offers an excellent illustration of how to examine the imbrications of race, gender, and class." - American Politics"The book makes major contributions to both the field of gender and politics and also to the Black politics field. In comparison to recent scholarship...this book offers a different perspective by focusing on issues of policy formation and the politics of policy-making. In her exploration of how the functioning of policy is framed, Alexander-Floyd offers us a useful analysis of policy change and continuity." - Julia S. Jordan-Zachery, Providence College"Nikol Alexander-Floyd s book deftly and importantly links discussions taking place in the Ivory Tower with the real world concerns of the Black political sphere. In a work of daring and with great insight, she weaves a narrative about gender within and through the history of Black America and offers us a lens to understand the past and the future possibilities of citizenship, democracy, and equality with just a bit more clarity. Gender, Race, and Nationalism in Contemporary Black Politics is a book that is well worth reading." - Noliwe M. Rooks, Center for African American Studies, Princeton University

"In this impressively original and profoundly iconoclastic book, Alexander-Floyd demonstrates that Black nationalisms share the same theoretical ground as the racist discourses they ostensibly oppose. Tracing the devastating effects of these mistaken assumptions on public policies, popular culture, and visions of community, she provides a powerful argument for new approaches to social justice in mainstream and minority politics." - Mary Hawkesworth, Editor, Signs: Journal of Women in Culture and Society

"In Gender, Race, and Nationalism in Contemporary Black Politics, Nikol Alexander-Floyd makes a significant contribution toward broadening and deepening our understanding of the ways that both the study and practice of Black American politics is shaped by gendered ideologies. Among the book s signal accomplishments is its examination of the hegemonic status of the trope of Black cultural pathology, which, as Alexander-Floyd shows, has been a fundamental ideological rationale for such seemingly disparate phenomena as Louis Farrakhan s Million Man March, Reagan/Clinton/Bush social policy, and liberal poverty research. Students, scholars, and citizens will benefit substantially from engaging with this book s interpretations and arguments." - Adolph Reed Jr., Professor of Political Science, University of Pennsylvania

"Alexander-Floyd s Gender, Race, and Nationalism in Contemporary Politics is a provocative, thoroughly researched feminist critique of Black nationalism in the U.S. She makes a compelling case in this pioneering approach to the study of Black politics for the connections between White nationalism and Black nationalism, especially with respect to their conservative gender ideologies and masculinist rhetoric. Alexander-Floyd s interdisciplinary study is a major contribution to the scholarship on the gender politics of the most influential movement in contemporary Black America." - Beverly Guy-Sheftall, co-author of Cole of Gender Talk and Director of Women s Research & Resource Center at Spelman College