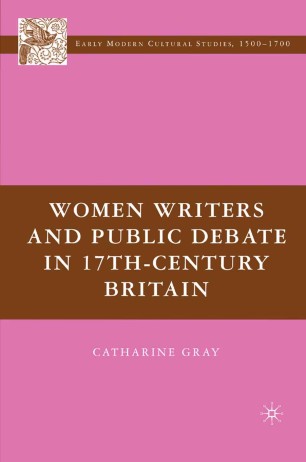 This book reveals women writers' key role in constituting seventeenth-century public culture and, in doing so, offers a new reading of that culture as begun in intimate circles of private dialogue and extended along transnational networks of public debate.

Catharine Gray is Associate Professor of English at the University of Illinois at Urbana-Champaign, USA

"This impressive monograph is a significant contribution to seventeenth-century studies." - Literature and History

"A book of meticulous scholarship, original insight, and sophisticated argument, Gray s Women Writers and Public Debate constitutes a major contribution to our understanding of the period of the English Revolution - those decades in the mid-seventeenth-century that saw the proliferation of print and the entry of distinctive women s voices into print and public debate. Questioning the notion of women as separate subjects and of the private/public divide, she moves us towards a nuanced and powerful understanding of the efficacy of these women in forming counterpublic spheres that challenged dominant powers." - Achsah Guibbory, Barnard College, Columbia University

"In this exciting and well-argued book, Gray shows how literate women who are marginalized in (or altogether absent from) most studies of seventeenth-century English political culture contributed decisively to what Jürgen Habermas controversially called the public sphere. Gray s innovative use the notion of the counterpublic developed by feminist Nancy Fraser invites the reader to historicize and rethink modern ways of distinguishing between - and gendering - public and private domains." - Margaret

"Gray has produced a new and persuasive argument for the significance of mid-17th-century women's writing. She does this with enormous, impressive scholarly detail: showing how across the ideological divisions of the Civil War women exploited and shaped new kinds of public sphere, often in opposition to public authorities. With her subtle insights into the poems, prophesies and treatises of Dorothy Leigh, Sarah Wight, Katherine Philips, and Ann Bradstreet, Gray makes these writings all the more significant for specialists, students, and general readers alike." - Nigel Smith, Professor of English, Princeton University

"In this important book, Gray argues women's centrality to a series of counterpublics in which both male and female writers critiqued powerful political and religious trends within seventeenth-century Britain. Chapters on Dorothy Leigh, Sarah Wight, Katherine Philips, and Anne Bradstreet demonstrate the skill and significance of those women's oppositional writing, while a concluding chapter on the Quaker writers Katherine Evans and Sarah Cheevers focuses on the transnational nature of seventeenth-century counterpublics. In thus re-gendering seventeenth-century cultural and literary history, Gray rewrites our field - opening it up to new questions, new meanings." - Elizabeth H. Hageman, Professor of English, University of New Hampshire