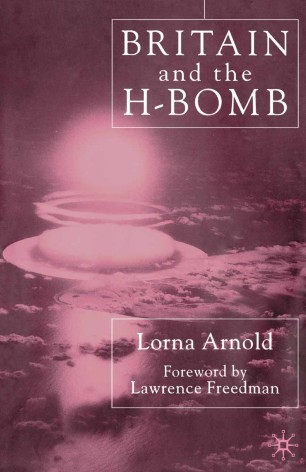 Britain and the H-Bomb

This book, written with unique access to official archives, tells the secret story of Britain's H-bomb - the scientific and strategic background, the government's policy decision, the work of the remarkable men who created the bomb, the four weapon trials at a remote Pacific atoll in 1957-58, and the historic consequences.

'Lorna Arnold...is particulary successful in making the scientific issues of the nuclear project accessible to non-technical readers such as students in history, international relations and politics and she provides a highly informative account of a very important phase in Britain's nuclear history.' - Dan Keohane, Keele University

'Britain and the H-Bomb tells the tale of the men who developed Britain's thermonuclear device through the drama of the tests in the Pacific. It does so with clarity and skill.' - Stuart Croft, Nature

'Britain and the H-Bomb is a valuable contribution to the history of the arms race, and deserves a wide readership.' - Peter Gissing, University of Sydney